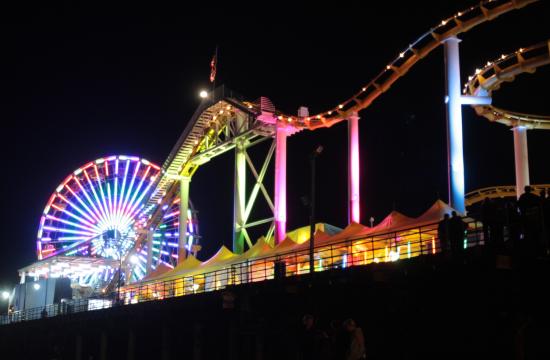 In honor of Pacific Park’s 20th Birthday, each evening beginning Friday, May 6, Pacific Park will illuminate one of the Ferris wheel’s 20 gondolas with the respective year to spotlight a Park milestone, starting with 1996. On Wednesday, May 25 all 20 gondolas will be illuminated, which will set the stage for the Ferris wheel’s new lighting package reveal the following day.

Pacific Park’s Ferris wheel is now fully dark through;May 25 to make way for a nearly $1 million new lighting package on the world-famous Ferris wheel that will feature higher resolution, greater color depth and faster “frames per second” display speed. The Ferris wheel will remain open for rides during the installation.

Pacific Park on the Santa Monica Pier opened on May 26, 1996, and the new Ferris wheel lighting package is part of the 20th Birthday celebration.

The Ferris wheel lifts riders over 130 feet above the Pacific Ocean to offer extraordinary views of the Southern California coastline from its location on the internationally popular Santa Monica Pier.May 16- 25