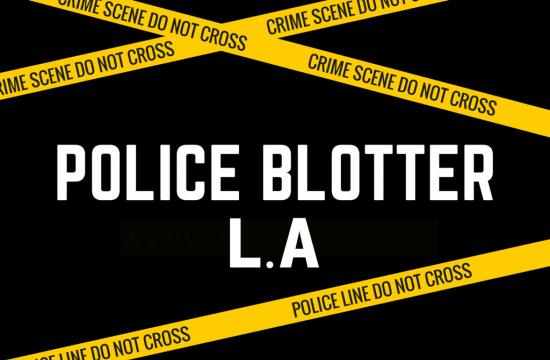 Not A City Employee.

On Tuesday, May 10, at 8:55 p.m. an eagle-eyed citizen who had been in the Civic Center Parking lot flagged down some passing officers and alerted them to the fact that a man had been acting suspiciously. The citizen added that this man had also been seen sitting inside a city owned vehicle that had been parked in the lot. The officers approached the vehicle in question and spotted the suspect still sitting inside the city owned vehicle. When the suspect spotted the officers approaching he exited the vehicle and began to walk away but the officers detained this man and began to question him. The man could not give the officers any valid reason as to why he had been inside the vehicle so the officers arrested this 27-year-old homeless man and he was charged with vehicle tampering. After being cited this man was released.

On The Scent Of A Thief.

On Tuesday, May 10, at 2:48 p.m. officers of the Santa Monica Police Department were called out to Sephora (Sephora is a French chain of cosmetics stores founded in 1970. Featuring nearly 300 name brands, along with its own private label, Sephora offers beauty products including makeup, skincare, body, fragrance, nail color, and hair care), located at 1244 Third Street Promenade in order to investigate a report that a suspected thief was being detained by staff at the store. Upon arrival at Sephora the officers spoke with staff members at the store who told them that the suspect had entered the store and had been seen to remove numerous items of merchandise from the display cabinets inside the store. The suspect had concealed the items inside a shopping bag and a purse and had then exited the store without making any attempt to pay for these items. A loss prevention agent from the store subsequently apprehended this woman outside the store and escorted her back inside while the police were summoned. The officers searched this 45-year-old resident of Los Angeles and discovered that she was in possession of a tool that is designed to remove the security tags of merchandise. This evidence, along with the statements from the Sephora staff members, gave cause for this woman to be arrested and charged with burglary and possession of burglary tools. Bail was set at $20,000.

On Thursday, May 12, at 10:11 a.m. officers of the Santa Monica Police Department were called out (via their radio systems) to attend to a report of an attempted robbery that had just occurred in the 500 block of Ocean Avenue. Upon arrival at the location the officers spoke with the victim who told them that the suspect had approached him in a stealthy manner from behind. The suspect had then grabbed the victim’s cellphone and a brief struggle ensued resulting in the victim being able to disengage from the suspect and retain possession of hid cellphone. The victim told the officers that after this had happened the suspect had walked away but was still in the vicinity. The victim described the suspect to the officers and the officers spotted this man nearby. The officers approached this suspect but as they did so the suspect attempted to run away. The officers gave chase and caught and detained this 40-year-old homeless man in the 400 block of Palisades Park. This man was arrested and later charged with robbery, obstructing a police officer and a violation of probation. Bail was set at $50,000.

Not A Game Of Monopoly.

On Thursday, May 12, at 7:13 p.m. officers of the Santa Monica Police Department were called out to the Bloomingdale’s Department Store, located at 315 Colorado Avenue in order to investigate a case of fraudulent currency. The officers arrived at the store and discovered that the loss prevention agents from the store were detaining the suspect. The officers spoke with these loss prevention agents and learned that the suspect had entered the store with some previously purchased merchandise that he wished to exchange. During this transaction the suspect had requested that the store clerk change a large denomination bill into smaller bills. The store clerk noticed that something was amiss with the larger denomination bill that the suspect had handed over and suspected that it might be a fake banknote. The clerk alerted the loss prevention officers and the loss prevention officers confirmed that the suspect bill could well be counterfeit and detained the suspect while the police were summoned. The officers, when they saw the bill in question, shared the aforementioned employees suspicions and so arrested this 40-year-old resident of Las Vegas and he was charged with passing a counterfeit note (this is a Federal as well as a State felony although the suspect thus far has been charged under California Penal Code 470(d)). Bail for this man was set at $100,000.