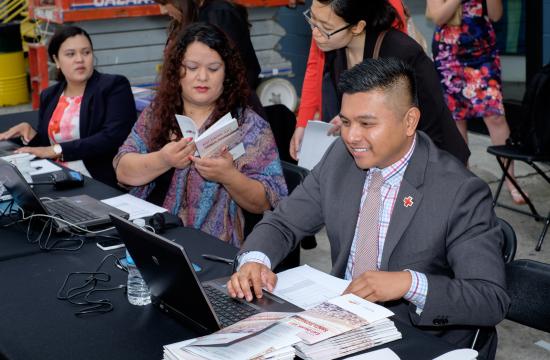 As recent wildfires in Canada have shown, disaster can strike anywhere at any time. The Red Cross is always there when it matters most, thanks to the support of local volunteers and donors.

That is why the Santa Monica Bay Red Cross Chapter recognized outstanding volunteers such as Christine Devine, Fox 11 news anchor, while celebrating 100 years of the organization in Los Angeles with a vibrant night of art and music at Bergamot Station; The event marked the 10th Annual Red Tie Affair, hosted every year by Santa Monica Bay Chapter, and is one of many special celebrations taking place this year in recognition of the Los Angeles Red Cross Centennial.

Devine received the 2016 Rick Crocker Spirit of Volunteerism Award for her long-time volunteer support of the Red Cross and her volunteer work throughout the Greater Los Angeles community.. The veteran news anchor, who recently celebrated her 25thanniversary at Fox11 News, has hosted the Red Tie event as its emcee for 10 consecutive years and is known throughout Los Angeles for her work as a “cheerleader for children.” The American Red Cross award is named for the Santa Monica police officer Rick Crocker, a Red Cross volunteer and Iraqi war veteran who died in 2005.

Judy Chambers Beck, chair of the Red Cross Santa Monica Bay board was awarded the 2016 Spirit of the American Red Cross Award. Beck, who was instrumental in launching the fundraiser in 2007, is an accomplished painter and has held key leadership roles at the local and national Red Cross and also is an active volunteer with Santa Monica’s WISE Center for Healthy Aging and St. John’s Health Center.

Santa Monica’s arts community went above and beyond to support Red Cross disaster relief. Attendees had the opportunity to mix and mingle to live music by Tyler Conti, Spanish guitarist Alfredo Caceres and Maya Smith, a recent The Voice Contestant.  DJ Elliot DeHoyos provided music throughout the evening and attendees watched four artists– Evol, Steven Zapata, Shane Grammer and Shen Li – produce  art live around Bergamot Station.  The Rose and William Turner galleries provided space for these live artist during the event, which was aptly called “EAT.DRINK.ART.”. Thanks also to Robert Berman, owner of the Robert Berman Gallery, as well as Writer’s Boot Camp and Santa Monica Auctions.

Numerous silent and live auction items were available for bid, as attendees munched on delectable food provided by Bruce Kalman, Executive Chef and Co-Owner, Union Restaurant, whose accolades include a Chopped championship title from the Food Network’s hit show.

Red Cross board members and Red Tie co-chairs Jamey Edwards and Bobby Sabelhaus thanked all attendees:  “Your participation tonight helps support the American Red Cross’ efforts to alleviate human suffering, not only Down the Street, like the victims of the Santa Monica Pier apartment fire in December, but also Across the Country and Around the World.”