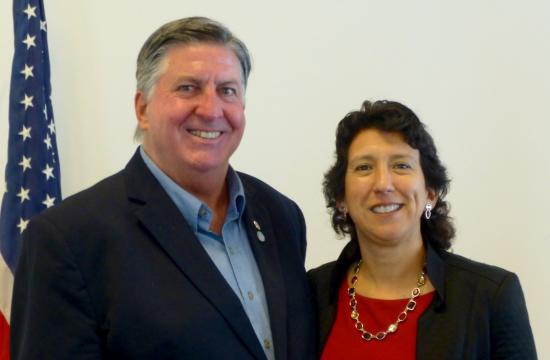 McKeown takes his position as Chair of the COG effective July 1st.

Besides Santa Monica, the Westside Cities Council of Governments consists of Beverly Hills, West Hollywood, Culver City, and parts of the City of Los Angeles and Los Angeles County.

“No issue challenges the Westside and Santa Monica more than mobility,” said McKeown, “and my term as Chair will help Santa Monica continue to lead the region in sustainable transportation solutions. The new Expo light rail links us to Culver City and beyond," Councilmember McKeown said.

"Santa Monica Breeze-style bikeshare, with state-of-the-art smart-bike technology, has now hit the streets of Beverly Hills.  We have allied ourselves with West Hollywood in the effort to bring light rail and its benefits to that city as well,” he added.

Councilmember McKeown has served as Santa Monica’s delegate or alternate to the COG continuously since its formation in 2006, and before that was active in helping the less formal “Westside Cities” group coalesce into an officially constituted regional Council of Governments.

His contributions during that process included securing an agreement of the constituent members of the COG to consider shared social issues, including homelessness, and devising the organization’s procedural structure, which favors decision-making by consensus instead of through potentially divisive votes.

For many years, McKeown co-chaired the COG’s Environmental Committee. “Air and water quality are clearly issues where regional cooperation is key,” he said.  “Local solutions to global problems need regional implementation, which our COG can help provide.”

McKeown will chair the COG during a year when the housing crisis in Southern California is demanding coordinated government action.

“I’ll be able to bring one of Santa Monica’s top priorities forward for regional action through the Westside Cities COG,” added McKeown, “and that’s increasing housing affordability and decreasing homelessness. Our cities agree that a shared focus on preserving neighborhoods, supporting aging in place, and creating achievable housing options for working families will benefit us individually and collectively. Homelessness is another shared concern, and we can accomplish more through joint action than any one city can manage alone.”