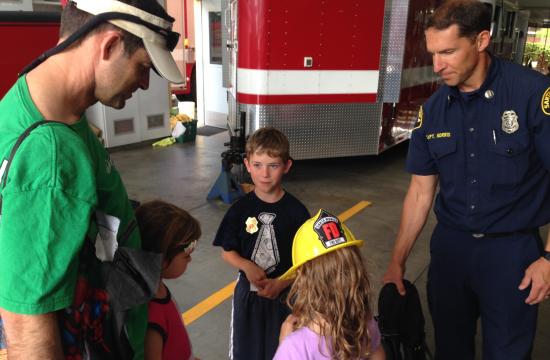 Every year on the second Saturday of May, fire stations throughout the city of Los Angeles welcome the public in honor of Fire Service Recognition Day. A steady stream of visitors, most of whom were children accompanied by their supportive parents, enjoyed all things fun and casual at Santa Monica’s fire stations with kids keen to get an inside look at what really goes on behind fire station doors.

Both the stations at 1444 7th Street and at 222 Hollister Ave. saw a steady stream of families keeping the firefighters volunteering their time on their feet. Most kids were excited to jump inside a fire truck, or to see one with its lights on.

“The event has become even more popular thanks to social media,” said Frank Evaro, who was the lieutenant chief on duty at the 7th street station.

More people than ever enjoyed the day, Evaro explained, with sharing the event on social networks proving more popular that previous promotional efforts.

Firefighters at the stations were happy to share their work with everyone who attended. At the Hollister Ave station, one firefighter was excited to speak with children who may be considering becoming a firefighter of the future.

Spirits were high, in both visitors and the smiling firefighters, young and old, who drew pleasure in sharing the great work that they do in the region and feeling strong support from the local community that they are sworn to protect.