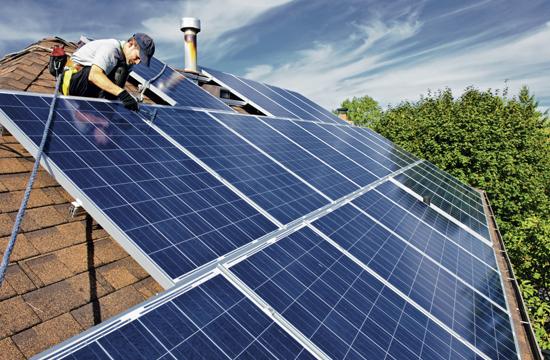 “The timing of the ordinance capitalizes on market trends in the solar industry. With the cost of solar installation continuing to decrease, Santa Monica residents and developers will now generate cost-effective renewable energy, improve the value of their property, and contribute to the City’s robust long-range goals for energy and climate mitigation, including reaching carbon neutrality by 2050,” the City explained.

“In Santa Monica we are moving away from buildings powered by fossil fuels in favor of clean and cost-effective solar energy,” said Dean Kubani, Santa Monica’s Sustainability Manager.

“This is not only the smart thing to do, it is also imperative if we are to protect our kids and grandkids from the worst effects of climate change,” Kubani added.

New single family dwellings are required to install a solar electric photovoltaic (PV) system, with a minimum total wattage of 1.5 times the square footage of the dwelling (1.5 watts per square foot).  That means a 2,000 square foot home would need a 3 kilowatt system, which is a typical size already seen on many homes.

With the noted decreasing cost of solar, the cost-benefit ratio is strong, the City said.

“I am proud to represent a district that recognizes the global responsibility this nation faces to deploy the best strategies at our disposal to prevent climate change and stimulate the green economy,” said Assemblymember Richard Bloom (D-Santa Monica). “As California moves forward with the most progressive climate strategy in the country, we welcome leaders like Santa Monica who push the boundaries.”

The ordinance is the third solar mandate in the country to take effect. Culver City began to require solar on commercial (>10,000 sq ft) in 2008, and the cities of Lancaster and Sebastopol became the first two cities to require solar in 2013; but Santa Monica’s is more demanding across the board.  The City of San Francisco’s recently adopted solar mandate will take effect in January 2017.

“Santa Monica is entering summer in the midst of transformational developments to improve our great city. This action has special meaning to me having attended the historic climate summit in Paris late last year," said Santa Monica City Mayor Tony Vazquez. “Covering our new buildings with renewable energy helps us address the challenge of climate change while ensuring Santa Monica builds cost-effective, resilient properties that maintain value,” he said. “Solar for all new construction combined with the Expo Line completion in May signal the City’s continued leadership in sustainable planning for the 21st Century.”

For more information on the requirements head to: www.sustainablesm.org

By mirrormmg May 7, 2016
in Uncategorized
Related Posts