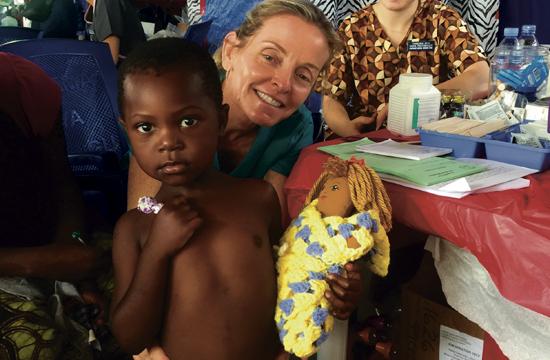 More than 1,000 eager walkers will lace their shoes for the 8th annual Walk to Africa in Santa Monica mid-May, joining together to raise much-needed funds for medical and child services in Africa.

While the prospect of walking from your own home to the continent of Africa is unthinkable, with all participants covering 8 miles each, the combined total distance is roughly the same as between Los Angeles and the center of Africa.

Dr. Bob Hamilton founded the event and began visiting and helping impoverished African countries in 1998. Since then he’s made a total of 23 trips to Sierra Leone, Liberia, Benin, Gambia, Burkina Faso, Kyrgyzstan and Guinea-Bissau.

His organization, Lighthouse Medical Missions, brings a team of volunteers to these nations, and in conjunction with local churches, establishes a makeshift clinic at which medical aid is provided to locals.

“We open up the clinic, and whoever comes, we take care of them,” Dr. Hamilton said. Care and medication are provided completely free of charge, by a team of volunteers.

Former Los Angeles mayor Richard Riordon is amongst those who contribute to Lighthouse. In the past, he’s helped provide them with soccer balls, which were handed out to children. Local charity Dollies Making a Difference, started by Cindy Simon in Pacific Palisades, also works with Lighthouse to give out hand-made dolls and teddy bears.

“We go and we try to make a difference in the world. We go and try to bless people without concern of who they are,” said Dr. Hamilton.

Lighthouse’s most recent trip to Africa was to a town called Mwanza, located on the southern coast of Lake Victoria in Tanzania. Leanza Cornett, who was crowned Miss America in 1993, took part in the mission. This was her third trip with Lighthouse, with which she became involved after being introduced to Dr. Hamilton as her children’s pediatrician.

Cornett isn’t a trained medical professional, but still takes an active role in running the clinic.

“I put on scrubs and a pair of latex gloves, and I help at the pharmacy, and do what I can as a volunteer,” Cornett said, adding that this past trip to Tanzania would not be her last.

J.J. Jamieson is another Santa Monica resident who was introduced to Dr. Hamilton as his children’s pediatrician, and decided to join the recent trip to Tanzania with his wife and triplets.

“We were trying to encourage them to think about the world and doing right, and how to be a helpful citizen,” Jamieson said, about bringing his children with him, who were 15 at the time.

According to Jamieson, the average volunteer day in Tanzania consists of waking at 7:30am, boarding a bus, and helping locals in need of aid until 4:30 or 5:00 in the evening. On the final day, they work even longer hours, in order to ensure as many people as possible receive the help that they need.

Walk To Africa takes place at Crescent Bay Park in Santa Monica on May 14, and will start at 9am. Participants can choose from either a 4 mile or 8 mile walk. They’re also hosting a separate 2 mile children’s walk, for younger participants.

Entertainment at the event includes local rock groups California Aftermath and The Trips – which is Jamieson’s triplets’ band, who have performed at the event for the past five years. There will also be a Family Fun Zone, with local children’s music act Twinkle Time performing.

All proceeds will be used to fund further Lighthouse trips, like the one to Tanzania that Dr. Hamilton, Leanza Cornett and J.J. Jamieson recently completed.