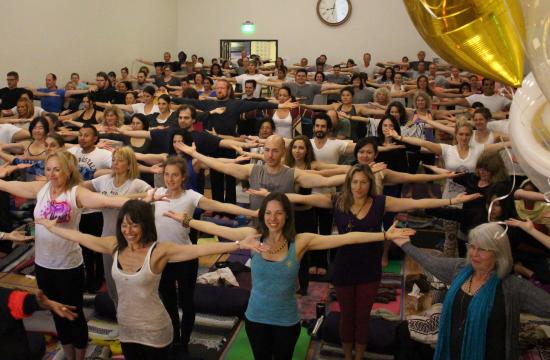 Often referred to as “The Yoga of Immortality” Sukshma Vyayama is known for its anti-aging and disease-defying properties.  Yogi Sunil’s visit to Naam Yoga LA, in Santa Monica presents a unique opportunity for people from all walks of life and fitness levels to experience this rare Himalayan knowledge.  He was fortunate to learn yoga’s deeper secrets from Shri Balmukund Singh Ji over a period of 11 years.

Having studied yoga formally since the age of two and apprenticed to many of the greatest yogis in India, Sunil is a yogi of the classical tradition, certified by the government to teach six levels of teacher training in India. He has engaged in scientific and medical work, studying the conservation of physical and mental health in today’s hectic lifestyle.

Yogi Sunil and Dr. Joseph Michael Levry, founder of Naam Yoga, both share the same yogic lineage, having studied directly with Shri Bal Mukund Singh Ji in India.  This living yogic lineage can be traced directly to Swami Dhirendra Brahmachari Ji and ultimately to his holiness Shri Maharishi Karthikeya Ji.  Shri Bal Mukund Singh Ji is a master teacher that served as the right hand man of Swami Dhirendra Ji, a Royal Master Yogi who studied directly under Shri Maharishi Karthikeya Ji, who is said to have lived over 300 years of age, gifting humanity with the sacred systems of the Himalayan Yogis.

Most of the well-known Indian yogis including many of the most famous teachers known in the United States actually studied at the Ashram run by Swami Dhirendra Brahmchari Ji, whose teachings allowed Sunil to master asana, as well as the secret yogic building principles of the subtle, energy body.  To this date Dr. Levry has maintained his relationship with Shri Bal Mukund Singh who is the direct disciple of Dhirendra Brahmachari, known as the teacher of the two prime ministers of India, Jawalharlal Nehru and Indira Gandhi. Indira Gandhi praised Sukshma Vyayama as the “keep-fit routine” for modern times in a public letter.  In the yoga book, YOGASANA VIJNANA, the science of yoga, written by Dhirendra Brahmachari, Indira Gandhi the late Prime Minister of India, wrote that she found the system of Sukshma Vyayam more convenient to follow as a keep fit routine when one is rushed for time and constantly on the move.   Therefore, this rare yogic system may turn out to be very applicable to our present stressful and fast paced lifestyle.

Shakti Naam Yoga as taught by Dr. Joseph Michael Levry synthesizes many of the secret yogic practices of the Himalayas and Naam meditation (the mathematical healing application of sacred mantra combined with sound).  Of importance is that in September of 2015, in the first significant study on sound meditation, Naam Yoga Meditation, as used in Naam Yoga Therapies, was clinically shown to have a tremendously positive impact in pain reduction in children being treated for cancer at Memorial Sloan Kettering Cancer Center in New York City.  To this date, Dr. Levry has produced 40 different compilation healing meditation CDs that are being used from people from all walks of life.

Naam Yoga is described as a devotional, heart opening, universal and healing practice, with mantras from all traditions.  In this way, Naam Yoga brings the East and West together.  Naam Yoga’s main areas of work over the last five years center upon massive prayer gatherings for global healing.  Most recently the Superclass for World Peace in 2015 in Mexico City united 100,000 people in prayer.   Naam Yoga LA, the international headquarters, is a non-profit 501 (c)(3), and has successfully partnered with well-established organizations such as cancer support centers, children with special needs, boys and girls clubs, Latino Diabetes Association, homeless shelters, mental health centers, addiction recovery centers, senior centers for alzheimers and dimentia, prisons and more.

The yoga health series taught in May and June at Naam Yoga LA offers an opportunity to experience these ancient teachings.  Shri Bal Mukandh Singh Ji is expected to teach for the first time in the Western world at Naam Yoga LA this summer/fall season.  For more information, you can visit www.naamyoga.com or call 310-751-7550.