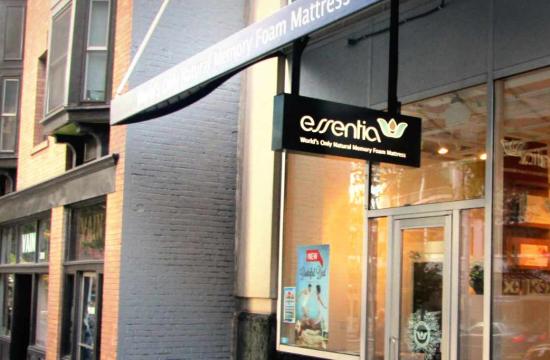 The ‘alternative space’ art gallery located within the store is sponsored by Essentia in recognition and support of the local arts community.

The new exhibition will be on display, with artworks for sale, through August 14, 2016.

Gino Perez is a 3rd generation Los Angeles native Mexican American who by age 17 (in 1994) was considered one of the world’s top skateboarders. He traveled the world as a professional skateboarder with such notables as Mark Gonzales. It was through his travels that Gino came into contact with the works of Picasso, Miro and Basquiat. Through these artists, and with the encouragement of his parents who are also artists, he became inspired to fulfill a new passion to express himself through art. His creativity blossomed into fashion design, painting/drawing and writing.

Gino’s artworks are both timely and timeless – social commentaries that are as much a public call to arms as they are contemplative and private. His genuine expression and everyday creative approach to life have earned him a following among local art and fashion enthusiasts. This new collection of work is pure and true to his theory of life: “The grey area is where we belong.” Gino hopes that his art inspires people to be comfortable with their own story and background and be motivated to express themselves in any creative form. As he often says, “Live for today, art for Pete’s sake.”

Fine art painter Kathy Shorkey’s art immerses one in mood and; emotion. An empathy for her subjects strikes one immediately through her bold juxtapositions light and; color, people and their worlds. An element of intrigue belies each of her subjects, whether whimsical or stoic. Insightful, often bold, Kathy has evolved her style, a unique marriage of techniques that range from the "Old Masters", through "Impressionist", ultimately embracing a contemporary modern vision.

Her use of color, profound, or subtle, brings about a vitality and simultaneously imparts a reflective quality to her work. Humanity, compassion underlie "what Kathy paints". To visually connect, to inspire & be inspired, to forever learn, these are why she paints. Draftsmanship, an impressive grasp of light, her innate sense of composition, all come together in "Kathy Shorkeys" wonderfully sensitive vision, sincere, and from her heart.

Jason Ryan is an editorial and commercial photographer and photojournalist. As he has noted, “I’ve been shot at by rebels south of the border, chased by bears in the American North West, and I have surfed some pretty cool waves. Although I reside in Santa Monica, the road is my home.” Fortunately, he often had his camera with him to memorialize his life’s journeys, several examples of which will be on display. Shooting as a professional photographer, his clients have included Senator Ted Cruz’s Republican Presidential Campaign, Willie Nelson and Family, Hard Rock Hoteland Restaurants, Lukas Nelson and Promise of the Real, Pepsi, Omni Hotels. His work has been published in numerous domestic publications. This exhibition is curated by Lou D’Elia.