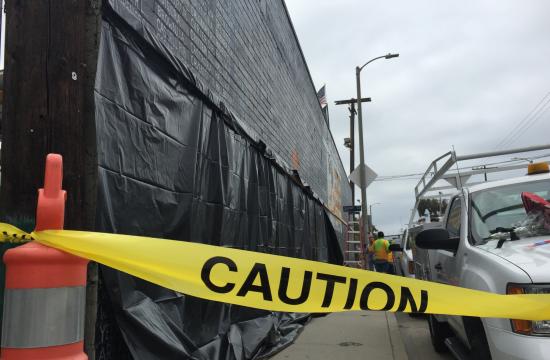 On Thursday, June 2, at 12:50 p.m. officers of the Santa Monica Police Department were called out to the Sears Department Store, located at 302 Colorado Ave. in order to investigate a report of a theft involving a set of loudspeakers. When the officers arrived at the location they spoke with the loss prevention agents from Sears who told them that a man had entered the store, picked up the loudspeakers and run out of the store without paying for them. The loss prevention agents gave the officers a detailed description of the suspect and the officers went in search of this man.Dear God!

On Thursday, June 6, at 11:20 p.m. officers of the Santa Monica Police Department were called out to attend to a report of “unknown trouble” that was occurring in the 1000 block of 27th St. The officers, while en route to the trouble, were informed that the reporting party had heard a man screaming about God and The Devil and that the screaming was emanating from a vacant apartment in the building. When the officers arrived at the location they exited their vehicle and were able to hear the man inside the vacant unit screaming about a variety of random topics that did indeed include God and The Devil. The officers approached the vacant unit and noticed that there was no evidence of a forced entry. The officers also spoke with the property manager who told them that the person inside the vacant unit did not have permission to be there. The officers entered the apartment and spoke with the screaming man and immediately noticed that this man was under the influence of either alcohol, drugs, religion, or a mixture of the three. The officers then arrested this 37-year-old resident of Tracy, California, and he was charged with trespass and occupying an apartment without the owners’ consent. Bail was set at $500.

On Friday, June 3, at 5:20 a.m. an officer of the Santa Monica Police Department was on patrol when he spotted a black Jeep Compass travelling south on Main Street. The officer utilized the computer technology installed inside his police vehicle to discover that this vehicle had been rented using the credit card and identification of an unsuspecting victim of identity theft and had thus been reported as stolen the previous day by the Inglewood Police Department. When the driver of the vehicle noticed that the officer was following him he made and abrupt left turn and pulled into a parking space in the 200 block of Main Street. The driver attempted to exit the vehicle but the officer ordered him and the passenger to remain inside the vehicle. Other officers arrived at the scene and they took the two occupants of the black Jeep Compass and began to investigate. The officers searched the vehicle and discovered several forged personal and financial documents in addition to other documents that had been taken as a result of burglaries. The officers also found other stolen items and narcotics inside the car. These suspects, one male, aged 26, and a resident of Venice, and one female aged 22 and a resident of Los Angeles were arrested and charged with grand theft auto, identity theft and receiving stolen property. Bail was not granted to either suspect.

On Friday, June 3, at 11:45 p.m. officers of the Santa Monica Police Department were on uniformed bicycle patrol in the 1700 block of Ocean Front walk when a victim flagged them down. The victim was an employee of a local bicycle shop who told the officers that two men had stolen his tip jar. The victim said that the men had entered the store and had attempted to ride away on a Segway. The victim added that when these men had been told that they would have to rent the Segway if they wished to utilize it they became upset and when the victim had informed them of the cost of renting the Segway they had become even more agitated and had begun to yell profanities at the victim. The victim then told the officers that one of the men had suddenly proclaimed that he was going to take the tip jar and had grabbed it, opened the lid, removed the money and hastily exited the shop, running in a southbound direction. The victim and the officers walked around the area and after a few minutes spotted the suspect who had taken the money from the tip jar in the 2600 block of Ocean Front Walk. This 27-year-old man of no fixed abode was arrested after a struggle and charged with robbery, resisting an officer, assault on a police officer and an outstanding warrant. Bail was set at $125,000.