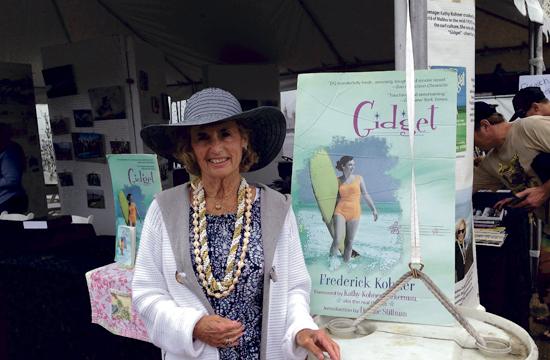 Santa Monica Pier was host to a series of paddleboard races this past Saturday, with an action-packed festival transforming the beach and Pier into full day of sporting, history and coastal fun.

The Paddleboard Race & Ocean Festival stacked a ton into just one day. The morning began with a series of swimming and foot races for both kids and adults. Then, paddleboard races were held, while on the adjacent Santa Monica Pier, a hula performance was held onstage. Throughout the rest of the morning was AAU volleyball play, hybrid run-swim-run races and more. Come afternoon, awards were handed out to winners in between performances by Cody Lovaas and pioneering surf guitarist Dick Dale.

On the Pier itself, was an all-day surf museum. A number of booths outlined key people and events from surf history, with historic surfing and boating-related paraphernalia on display. Surf culture icons were also on hand throughout the day to sign books and greet visitors, including surfing legend Gidget. The competition side attracted a host of aquathon athletes, which is a style of race involving running and swimming. “I’ve done this a number of times already, and it’s a really great event,” said Brian Panosian, who took second in his age group in the one mile ocean swim. Panosian, a seasoned aquathon competitor then went on to compete later in the day in a “run-swim-run” event held in between paddleboarding races. Jane Culp was another of Saturday’s competitors, racing in a 5.5 mile-long paddleboard loop. She has been competing since 2010, and is in it for the sense of satisfaction she gets after pushing herself in a competition. “I love this venue! Today the weather was rough, but there’s lots to do, see and eat, and I love watching people,” Culp said.

Paddleboard races have been held at the Santa Monica Pier since the 1930s and were some of the first in the world, making the location historic. However, beyond just its history, the competition and beach activities brought together hundreds of locals and visitors alike, to partake in the full day of fun by the ocean.

The 1st through 5th place winners of each race received cash prizes, with as much as $1,500 awarded to the men’s and women’s winners of the SUP (standup paddleboard) race. Dustin Kushner was volunteering for the Bay Foundation, who sponsored the event, but was also there to watch the competition as an avid outdoorsman himself. “The best person can get some really bad waves. It’s any man’s game – anybody can win it,” he said.

The Bay Foundation is based in Santa Monica, and partners with people and organizations to enact projects and policy change designed to clean up waterways, create green spaces in urban areas, and restore natural habitats both on land and underwater.

For more information about the Bay Foundation, visit santamonicabay.org.