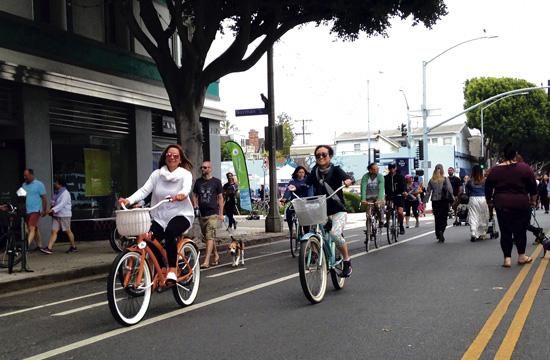 Main Street from Marine to Colorado, and Ocean from Colorado to 5th St., were closed to motor traffic for the day, the streets filling with keen cyclists, pedestrians, skaters, and stilt-walkers from first thing in the morning.

“Coast was a wonderful community building event in our city,” said Santa Monica Recreation & Parks Commissioner Phil Brock. “To see so many happy faces using our streets as a park was a gratifying experience.”

“I thought it was a glorious day for all,” Santa Monica City Councilmember Sue Himmelrich told The Mirror. “One of the most positive aspects as a councilperson was the “Meet the Council” booth. At least while I was there, the interaction with residents was much happier than usual – we should all get outside more, I think!”

With a host of art, music, food, and activities on the agenda, Coast was created to celebrate the beginning of Expo, marking Santa Monica as a multi-modal city, according to Santa Monica City.

“Our Coast event was SaMo Festival meets Open Streets,” said Councilmember Pam O’Connor. “Although shorter routes than other open streets events in the region, ours supported walking as well as rolling – bikes, skateboards, etc,…Many folks said ‘let’s do this again…and again!’ I hope we can.”

Many years in the planning and costing upward of $400,000, the joint Santa Monica City-Metro project fell in stark contrast to Santa Monica’s usually-jam-packed weekend streets.

“Clearly people relished the opportunity to walk, bike, chat and eat on carless streets and to pause from busy routines to enjoy a shared sense of community,” commented Mayor Pro Tempore Ted Winterer.

“Everyone I spoke to at Coast…was overwhelmingly enthusiastic about the event. Many asked if we could do it more often, as much as once a month,” he added.

“I saw thousands of smiling faces sharing the joy of traffic-free streets, if only for the day,” commented Councilmember Kevin McKeown. “Main Street and Ocean Avenue were a constant stream of walkers, skaters, and bikes – but the star of the day was our new Esplanade. Not only does the Esplanade provide a spectacular entry point from the Expo to the Pier, it further connects downtown Santa Monica to Tongva Park and Ocean Park beyond.”

Since Sunday, there have been calls for the event to add even more music, food trucks and spontaneity, perhaps even replacing the Santa Monica Festival as a major yearly event, or becoming a regular monthly affair.

“Events like these help to create civic pride and support our local businesses,” said Santa Monica Chamber of Commerce President Laurel Rosen. “We would have like to see more business engaged,” she added. “The businesses that had activations outside their storefronts had a great day!  We look forward to more of these city collaborations in the future.”

To let the City know your thoughts, send an email to: manager@smgov.net.