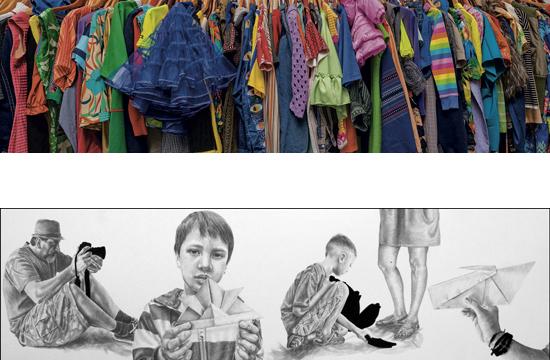 Now that the hoopla surrounding the Expo Line from Culver City to Santa Monica has died down a little, there’s an opportunity for riders to appreciate the artwork panels that adorn each of the seven stations from Palms to Downtown Santa Monica.

As with previous Metro stations, artists were commissioned to create original artwork for each of the stations that reflect the unique history of each station’s area.

A total of seven artists created 98 pieces for Expo Phase 2, with anywhere between eight and 24 individual panels adorning each station.

Shortly before Phase 2 opened on May 20, journalists were offered the opportunity to travel along the line to three of the Westside stations with the artists themselves, who spoke about the inspiration for their work.

The 10 panels at Palms station, entitled Artist Educators, were created by Shizu Saldamando, whose work has been exhibited around the world.  One of her panels depicts a woman on a bicycle surrounded by earrings hanging off a long strand of red ribbon.

Saldamando said, “I’ve done a lot of portraits of my family and friends, people who are often overlooked but whom I really admire. Those people are artists and teachers who live across this extension line.”

The woman on the bicycle in the artwork (who was also on the tour) is Sochi – a teacher who lives in West LA and who is a close personal friend of Saldamando’s whom she met while studying at UCLA. “She has this amazing collection of earrings so I incorporated those,” Saldamando explained, “because I wanted to incorporate a personal element into each portrait.” And the bicycle is because Sochi is “a big bicycle head.”

Another panel depicts a palm tree on one side – “in honor of the neighborhood of Palms,” with a cherry blossom tree on the other, an homage to Saldamando’s Japanese heritage and the Sawtelle area they now live in, which is known as Little Osaka.

The panels look like wood panels and also reflect Saldamando’s heritage. Her grandfather created wood sculptures while in a Japanese internment camp during World War II.

Abel Alejandre’s 12 panels at Westwood/Rancho Park station are entitled “Panoramas,” and are striking for the use of both black and white imagery and the fact that except for the children depicted, the majority of his panels don’t show people’s faces.

“I wanted to show the would be commuters in a way that I could avoid having to show every single person and be fair to everyone, which I didn’t think I could be, so I went and cut everybody off at the hips,” he explained.

The 48-year-old artist who was born in Apatzingan, Mexico, and who also created murals for the 1984 Summer Olympic Games in Los Angeles, said, “I really wanted to tell his narrative through body language.”

In one panel a man on crutches is a reminder of the former Sawtelle Veterans Home as well as the current vets that still live in the area. A gardener holding the hand of a little boy picking up an origami paper crane is “a reference to the community that was and still is here,” Alejandre said. Like Saldamando, the origami crane also references nearby Little Osaka.

As for the use of black and white?” Alejandre shrugged. “I painted in color for 25 years but once I started painting in black and white, I never went back!”

The eight panels at the Expo/Sepulveda station are entitled Right Above the Right-of-Way and were created by 45-year-old Susan Logoreci, who has created public art projects for both LAX and Los Angeles’ City National Bank headquarters.

The panels are a series of intricate drawings depicting different aerial views of the area that surrounds the station.

Logoreci said she wanted to give Expo Line riders a ‘you-are-here’ feel, and set about mapping the area and chose to use imagery from around the station.

The aerial views come from Logoreci’s decision to take two chartered helicopter flights around the area and after taking “thousands of photographs,” she set about creating the panels.

The panels don’t just map the landscape but also the shift from day to night. Coming into the station westbound you see the night panels but on the east side you see the day panels. The day panels “look like a David Hockney pool moment, and as you look at the night side it’s kind of a more noir, Raymond Chandler-esque moment,” Logoreci revealed. “I really wanted to give the rider a lot of different things to look at,” she said.

Riders will also note a lot of purple in the panels. “I took the helicopter rides around this time of year,” Logoreci said. “All the jacarandas were in bloom and I was inspired by that.”

The other four stations along the line also have stories to tell. Be sure to look up and study the panels when you’re waiting for your train. If you’re inspired, there are free docent guided art tours of the line. Call 213-922-4ART or visit www.metro.net/art.