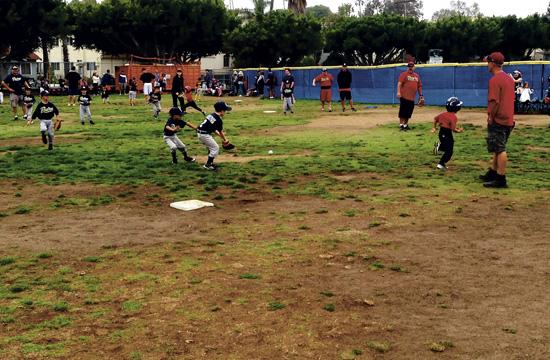 The all-day baseball carnival resulted in kids constantly filtering in and out of the park, all vying for a winning trophy in their division.

Matches were held during the entire day on three different diamonds – one full-sized, and two smaller ones for younger teams – with energy high as competitors gave it their all, cheered on by their community.

The PONY league has five age groups, with modified rules enabling younger kids to get involved.

“When you get to the playoffs the energy is there,” said Pinto Division (ages 7-8) Commissioner John Garcia. “The excitement is there in the crowd. It’s definitely an event to be seen.”

At both the games played by the older kids on the larger baseball diamond, and the younger children’s games in the adjacent park, parents were cheering in support of their little players. With warmup exercises by coaches before the games, the kids were energetic and having a great time playing ball.

Baseball at Los Amigos is a tradition that dates back to 1951, when youth baseball teams began holding their annual championships at the park. Originally, this event was linked to the Western Boys Baseball Association, and is now run by Santa Monica PONY Baseball.

PONY is a non-profit created to instruct youth between ages 4-14 in not just baseball but also sportsmanship and leadership. Individual leagues are separated into age groups, and all have equestrian names, from Shetland to Mustang to the culminating PONY league for teens aged 13 and 14. For more information head to: santamonicaponybaseball.com.