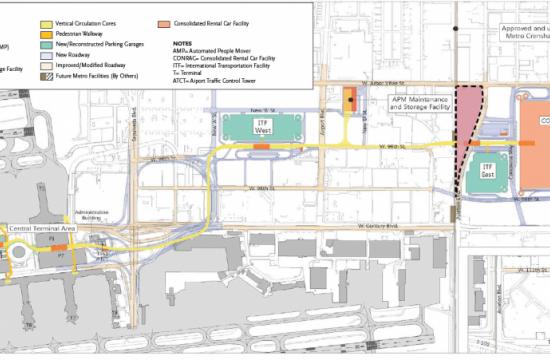 Metro is planning a new station that will connect the Los Angeles International Airport (LAX) to the regional rail system. Once completed, the Airport Metro Connector-96th Street Transit Station will provide the connection to a future Automated People Mover (APM) that will connect to the LAX central terminal area. The APM is being planned and will be built and operated by the Los Angeles World Airports (LAWA).

The transit station is envisioned to be the new “Gateway” to LAX for transit riders and will be served by both the Metro Green and Crenshaw/LAX Lines. In addition, the station will feature a bus plaza for Metro and municipal buses, passenger pick-up and drop-off and amenities for pedestrians and bicyclists.

The public hearing on the DEIR will take place on Wednesday, July 13, from 6 to 8 p.m. at the Flight Path Learning Center, 6661 West Imperial Highway, in Los Angeles. The facility is served by Beach City Transit Line 109 with connections at the Metro Green Line Aviation/LAX Station and LAX Transit Center. Free parking is available on site.