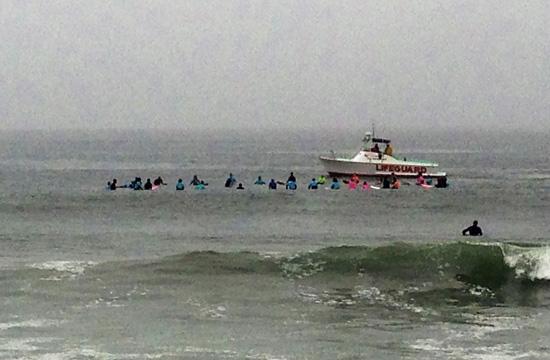 The annual Nick Gabaldón Day was held on Santa Monica’s Bay Street Beach at Tower 20 Saturday, with local environmental advocate Heal the Bay helping to celebrate Los Angeles’ diverse community of ocean lovers. A coalition of groups organized the day as a salute to Nick Gabaldón, a 1950s waterman of African American and Latino heritage, known as L.A.’s first surfer of color.

Saturday’s celebration began with a memorial paddle-out, surfers young and old silently honoring a man who fought to break through race segregation.

In 1924, the only area that African Americans were allowed to surf without being threatened in Santa Monica was Tower 20, Bay Street Beach, then known as the Inkwell, one of the few shorelines open to African Americans during the Jim Crow era.

As an African American surfer, Gabaldón frequented the Inkwell before he began surfing without issue at other beaches that were traditionally segregated.

A full day of family-friendly activities at the beach took place in his honor.

The Surf Bus Foundation and Black Surfer Collective offered a day at the beach and free surf lessons for kids, bringing many in from inland neighborhoods such as South L.A. and Boyle Heights, some who were seeing the beach for the first time.

By providing such beach access and lessons to families who otherwise may not have the means to do so, the organizations hope to inspire a new generation of surfers, in the way that Gabaldón had inspired his generation, representatives explained.

“Barriers to access begin before the coast,” said Clark. Adding that many low-income youth are restricted from what could be a vibrant pastime. Access to swimming lessons, transportation to the beach and surf instruction can be minimal to non-existent for many lower-income families, she explained.

With many of the kids loving the water and the opportunity to ride the waves in honor of Gabaldón, they also took the time to learn from info booths, enjoy film screenings, and listen to live storytelling by guest celebrities.