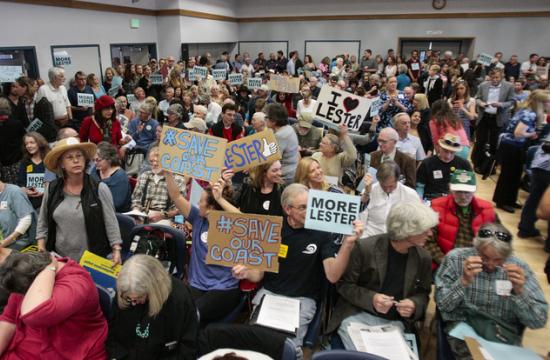 There’s a good chance state lawmakers this year will pass a ban on ex parte communications involving members of the Coastal Commission. It’s a nice idea, but inadequate. Ex parte communications – the legalistic name for private meetings, phone calls and email exchanges between key state officials and the people or companies they regulate – emerged two years ago as one of the most corrupt parts of California’s public life. That’s when emails revealed the president of the state’s Public Utilities Commission had met secretly with executives of the Southern California Edison Co. during an industry meeting in Poland.

The meeting produced a hotel napkin outline of a $3.3 billion charge to Edison customers, who might get off the hook later this summer for at least some of the expense of closing the San Onofre Nuclear Generating Station, caused in large part by an Edison blunder. Before then, executives of Pacific Gas & Electric Co. were already talking and emailing secretly with PUC members and staff about how to ease their costs for the 2010 San Bruno gas pipeline explosion that killed eight and destroyed dozens of homes.

These were classic examples of ex parte communications, a practice that’s long allowed both sides of disputes before some state regulatory agencies to make their case in private. Reality is that a big advantage always accrues to utilities and other interests with the money to hire full-time advocates paid to develop close ties with regulators. Last year, legislators unanimously passed several PUC reform bills including a ban on ex parte communications with commissioners. Gov. Jerry Brown quickly vetoed the measures, which could have harmed the interests of San Diego-based Sempra Energy, parent company of Southern California Gas Co. and the San Diego Gas & Electric Co., where Brown’s sister Kathleen is a highly-paid director.

The bills Brown vetoed had a narrow focus, homing in on only one state commission. Revelations over the last year made it clear that ex parte communications have also long been a key part of how the state’s Coastal Commission operates. No one knows how much influence consultants meeting privately with commissioners had over the springtime firing of that agency’s strongly environmentalist former executive director. Brown, whose coastal appointees approved the firing, has so far said nothing about ex parte communications, or whether he will veto the bill banning them from Coastal Commission operations that easily passed the state Senate. It is carried by Democrat Hannah Beth Jackson, who represents much of the Santa Barbara and Ventura county coastline. Jackson’s bill is fine as far as it goes, but it falls far short of what’s needed.

Brown’s 2015 veto means ex parte communications are still legal at the PUC, where commissioners lately adopted their own rule against such conversations or emails. But the commission can cancel that rule anytime, and just might when the heat is off. Ex parte communications are also allowed at the state Board of Equalization, the Public Employee Relations Board and the California Air Resources Board, where automakers are a constant lobbying presence. What’s needed is an across-the-board ban, not piecemeal legislation like last year’s attempted ban at the PUC and this year’s reaction to crises at the Coastal Commission. Members of these commissions and boards often whine that they rule on so many cases they’d be swamped if they had to act only on information in submitted documents. They say their talks with parties affected by their rulings give them better, more complete understanding.

But these officials are often well-paid, the PUC commissioners and many other state board members taking home six-figure salaries. Why shouldn’t they pore over detailed documents, rather than subjecting themselves to the blandishments of lobbyists, consultants and landowners? At the PUC, commissioners also often have private meetings with Wall Street bankers whose investment choices can be affected by state rulings, especially if those bankers know in advance which way a decision will go. All of which means the playing field in state government right now tilts toward favoring big money interests. Sure, a ban on ex parte communications by coastal commissioners would be a step in the right direction, but it’s just not enough, not when the same practice is common elsewhere, too.