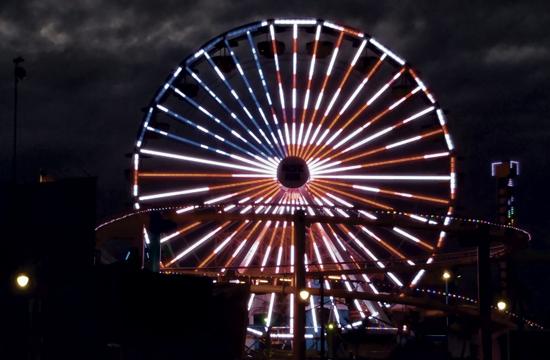 The Oxford Dictionary definition of the word "Americana" is as follows: "Things associated with the culture and history of America, especially the United States." Younger generations have used the word to classify certain kinds of "roots"-oriented music. You can get symbols of Americana on your car license plate. One person who did just that was James Wesley Howell, whose Indiana license plate bore the logo of the National Rifle Association. Howell was arrested in Santa Monica on 11th Street on Sunday with assault rifles and explosives in his car after telling police he was headed to the L.A. Pride parade in West Hollywood.

As of Monday of this week, police were still trying to sort out Howell╒s intentions, although a statement by SMPD chief Jaqueline Seabrooks on Twitter initially said that during the arrest, the suspect made remarks to one of the officers "of wanting to harm Gay Pride event." Later that was amended to explain that Howell said he was going to the Pride event but did not make additional statements about his intentions.

The National Rifle Association (NRA) is Americana now, because after the shootings in Orlando their role in the very current history and culture of America cannot be denied. The shooter in Orlando was an American citizen who legally purchased the weapons he used to take away innocent lives within a week of the tragedy. And those weapons, a .223 caliber AR-type-rifle and 9 mm semiautomatic pistol, were available to him in no small part due to the diligent efforts of the NRA.

The availability of semiautomatic weapons is now also Americana. Similar to the way states in the South defended their right to keep flying the Confederate flag when it was obviously time for change, so have the gun lobby and politicians in its thrall defended an American right to own semiautomatic weapons whose only clear purpose is to kill humans. Big ammo clips, ditto. And thus mass shootings are now another day on this planet; yet another "Whew, what are ya going to do?" uttered before dinner.

And thus mass shootings are now another day on this planet; yet another "Whew, what are ya going to do?" uttered before dinner.

We are ingraining the image of a shooter cutting down scores of innocents into our general perception of modern life, the way homicide has been integrated into life in the Middle East and other parts of the world. The significant difference is that in those other places the armaments are sold by soulless dealers of death. As part of our newer elements of Americana, we are freely choosing to staunchly defend our "right" to bear mass-shooting enabling arms so that our neighbors and village merchants can keep providing them.

There is the Americana of our obsession with records and keeping scores, such as the fact quickly disseminated after the Orlando shooting that the Pulse nightclub shooting was the biggest one ever. Now, there╒s no way we╒re ever going to stop media from reaching for inane and even sickening statistics. But ask parents who lost children in the Sandy Hook shooting whether they are particularly moved one way or the other to hear that yet another American mass shooting is the new record holder. Then ask yourself why we sat on our hands and waited for that new statistic to be created.

There is the Americana of nauseating exploitation, in some cases barely 24 hours after the event. One candidate used the dead as a platform to stand on for a rerun of his xenophobic view that all Muslims should be banned from coming to America. Freely toggling back and forth between ╥radical Islam╙ and Muslims in general such that there was no mistaking his bigotry, this person who would be our king used the dead to advance his rancid agenda and whip-up the brushfires of Islamophobia.

There is the Americana of soft targets. That someone has a mind so handicapped that it might put together being distraught over two men kissing with shooting to death innocents in a nightclub strongly suggests that, like the coward he was, the shooter was most concerned with his own success rate. You have a grievance against the role the U.S. is playing in the world, so you shoot-up a gay nightclub? No. Your political statement, sir, is this: "It’s all about me and what I can accomplish before I end my disintegrating life."

On the day JFK was assassinated, my elementary school teacher listed the other assassinated U.S. Presidents on a chalkboard. She was directing our grief over something that seemed impossible to comprehend into the context of history. And now, possibly in other future elementary schools, Orlando will be fit into the context of "well, what exactly?" Perhaps the early 21st century’s experience with the triumph of deadly banality: Toxic, simplistic political campaigns and freely distributed semiautomatic weapons, which said "politics"  are vowing to protect. Which lobbyists are protecting. Future teacher to class: "Here is a historical list of the ways in which we gave up on doing the smart and right thing in the early part of this century. Orlando was but one victim of our lassitude.."