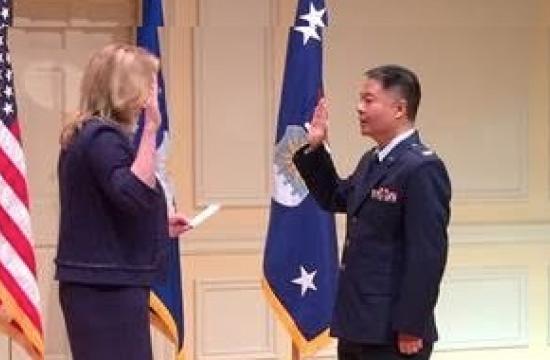 Mr. Lieu’s promotion to Colonel is a rare event.  Of the 660,000 men and women serving in the United States Air Force on active duty, reserves, and guard, less than four thousand have attained the rank of Colonel.  During his Air Force career, Mr. Lieu served on active duty in Operation PACIFIC HAVEN.  He has also received numerous medals for his military service, including the Air Force Humanitarian Service Medal and multiple Meritorious Service Medals.

“As the son of immigrant parents who were able to achieve the American dream, I joined the Air Force on active duty and decided to continue to serve in the Reserves to give back to America – an exceptional country of boundless opportunity that has given so much to my family.  I am deeply humbled to be promoted to Colonel.  Thank you to Secretary of the Air Force James, Leader Pelosi, Whip Hoyer, Veterans Affairs Secretary McDonald, and Representatives Moulton, Russell and Gallego for sharing this special moment with me today.

“It is a profound honor to be a part of the United States Air Force, a stalwart and steadfast family made up of imminently dedicated and skilled professionals who do so much to safeguard America in the air, in space and in cyberspace.   I look forward to continuing to serve our nation as an officer and as a Member of the House of Representatives.  In both these solemn duties, I pledge to always honor the Air Force’s core values:  integrity first, service before self, and excellence in all we do