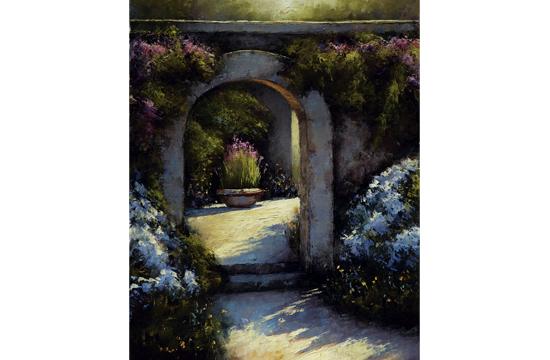 Damon Ramos is an artist born and raised in Santa Monica. He will be one of the popular Laguna Art-A-Fair feature artists at the event that opened yesterday.

Ramos grew up in the late 1960s and early 1970s and was enveloped in a world of creativity from a young age.

“Southern California in the 1960s was a remarkable place. The music, fashions, ideas, my parents exposed me to all of it,” he said. His family took many road trips throughout the western United States which lead to an appreciation of western US’ natural beauty.

At first, Ramos’ artistic teachings were musical, having started piano lessons at age 10. After studying classical and jazz piano as an adolescent, he later began playing with several local bands in the L.A. club scene of the 1980s. During this time he also developed an interest in architecture, experimenting with drawing and rendering during the time he wasn’t playing music. These two loves manifested in the completion of advanced studies in music and architecture.

At the start of the 90s, Ramos turned to painting as a form of expression, spending four years studying technique, color theory, and composition. He started painting with a brush at first as most artists do, but switched to a palette knife exclusively after a while.

“I fell in love with the strange colors and textures of knife painting,” Ramos explained. Thanks to his brother-in law Julio C. Garcia, a major figure in the art world, Ramos was able to get a leg up, with Garcia exhibiting his work at ArtExpo Los Angeles in 1998.

He will be featured in this year’s Laguna Art-A-Fair, known for discovering artists from around the world and bringing them to the Laguna Beach Canyon, where visitors and residents alike have an opportunity to immerse themselves in the culture of the area. For more information head to: art-a-fair.com.