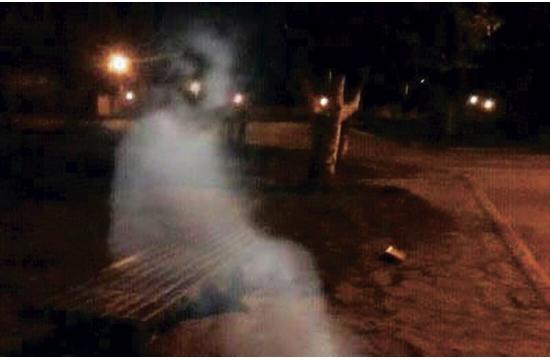 It happens every day. The sun goes down, a cool breeze rolls in from the ocean, chilling your spine with every second. According to some, that’s not just the ocean breeze that’s the paranormal. Ghosts. Spirits. You get the idea. The Haunted Santa Monica Ghost Tours are in session! Starting in October last year, the tour aims at immersing visitors in the haunted history of our dear town Santa Monica.

Contrary to what you might think about the ghost tour, it’s surprisingly neutral in its approach. Unlike a show like “Ghost Hunters,” where the hosts are trying to prove that ghosts are real at any cost, treating every little sound like it’s a profound message from the dead, the Santa Monica-husband-wife team of Zack and Candace Fahey take you on a tour more on the history of ghost sightings and reports in Santa Monica, rather than trying to prove that there are spirits roaming around.

The idea for the tour came from a game the duo likes to play, where they ask each other what business they would open in any given neighborhood. “We look around for what’s missing. We’re not looking for competition, we’re looking to fill vacuums,” Zack told The Mirror.

The couple enjoyed a ghost tour they took on vacation in Hawaii, but after returning home to Santa Monica, they were surprised to find the distinct lack of paranormal tours in the area, so decided to start one themselves.

“We started looking around, and found a lot of great ghost stories and interesting phenomena out here in a very dense area,” Zack said.

The tour itself involves Candace almost dragging her husband by the arm, holding a flashlight as a beacon for the group listening intently as he explains stories and the history of old Santa Monica.

Even someone who’s lived here their whole life may not know that the pier is actually made of two piers, one that was made for dumping sewage past the waves in the early 20th century, the other was made for entertainment. That fact is a lead-in to other stories of merry-go-rounds coming to life on their own, and women seemingly floating above the water, and…I won’t spoil too much for you, seeing is believing.

The experience goes around Ocean Avenue and eventually ends near the promenade, where a séance is conducted. Whether or not you hear anything, varies from tour to tour, according to the Faheys.

The Haunted Santa Monica ghost tours isn’t just an attempt to have more believers in the paranormal. It’s a history lesson, and a fun one at that. You can find more information, or set up your own tour at santamonicaghosttours.com.