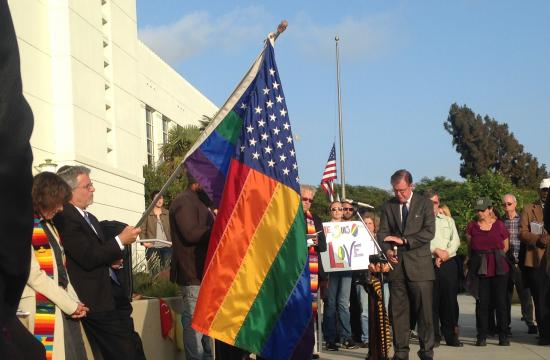 Santa Monicans gathered in front of City Hall at the end of the day on June 14th to honor and remember the victims of the Orlando shooting.

Ross Altman led people in singing ‘We Shall Overcome” and the assembled group joined in and crossed their arms, Civil Rights Movement style, to grasp the hands of the people on either side.

Welcoming remarks were made by Mayor Tony Vazquez and Council Member Ted Winterer.  Welcome also came from Janet McKeithan, the Minister at the Church in Ocean Park, President of the Interfaith Council and the organizer of the Vigil.

Representatives of Christian, Buddhist, Jewish, Muslim, and Bahia faiths spoke of the shared values of all faiths.  The message from each religious leader was one of love and compassion for all people.

Rabbi Neil Comess Daniels said, “In my tradition we are told ‘You shall not stand idly by the blood of your neighbor.’  It is not a suggestion.  It is a mandate.”

Torie Osborne, political and community leader, spoke of being part of a world-wide community, of demonstrations in London, Paris, Los Angeles, Orlando, Tokyo.  The Eiffel Tower, she said, was lit the colors of the LGBT flag.  http://www.politico.eu/article/eiffel-tower-orlando-lights-mass-shooting-anne-hidalgo-isil-terrorism/

Osborne spoke of the compassion of the people of Orlando, saying, “Straight or gay, the people stood in the blistering son for over 5 hours to donate blood to the wounded victims.”

“We are that sister, brother, man, cousin, friend to those beautiful souls that were robbed of their life and stolen from our hearts.

The vigil concluded with the names of the Orlando victims being read out and a resonant bell sounding with the reading of each name.

Names of the victims. City of Orlando www.cityoforlando.net/blog/victims/

The Santa Monica Vigil for Orlando was over, but the words of religious and community leader Theresa Bonpane were remembered, “We join with tens of thousands of people all over the world,” and people left City Hall knowing this was not over.