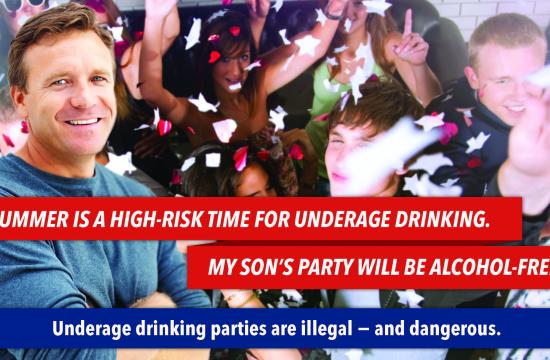 Santa Monica­­ – This week, more than 4,300 Santa Monica households will receive mailings notifying them of the Santa Monica Police Department’s increased enforcement of youth drinking laws during graduation season and throughout the summer.

The mailing is the most recent in a series being sent to residents urging adults not to host underage drinking parties.

“These mailings are meant to encourage adults to act in the best interests of youth and the community by keeping alcohol out of minors’ hands, especially during this high-risk time of year,” said Lieutenant Saul Rodriguez, Public Information Officer for the SMPD.

According to the Substance Abuse and Mental Health Services Administration (SAMHSA), first time teen use of illicit substances, including alcohol, peaks in summer months.

“Underage drinking, especially in social settings such as parties, can pose significant risks including use of other drugs, intoxicated driving, injuries, and fatalities,” Rodriguez said.

Each year approximately 5,000 young people under the age of 21 die as a result of underage drinking, including approximately 1,900 deaths from motor vehicle crashes, 1,600 as a result of homicides, 300 from suicides, and hundreds from other injuries such as falls, burns, and drowning (National Institute on Alcohol Abuse and Alcoholism; NIAAA).

Since October of last year, the SMPD has conducted a range of enforcement operations such as Minor Decoys, Shoulder Taps, and neighborhood party patrols intended to reduce youth access to alcohol, and by extension, lower the rates of underage drinking in Santa Monica.

The operations are funded by a grant from the Substance Abuse, Prevention, and Control Division of the LA County Public Health Department. The police department has been working on the grant with the Westside Impact Project, a county-funded initiative to reduce alcohol-related harms in Santa Monica and Venice.

The Westside Impact Project has been supplementing the police department’s enforcement with community-based operations known as “Recognition and Reminders”, which are intended to check the age verification and carding practices of alcohol retailers in Santa Monica.

“We hope these mailings will remind parents and party hosts to be vigilant in preventing underage drinking during this celebratory season,” said Dana Sherrod, Prevention Coordinator for the Westside Impact Project.

Recent data show high rates of underage and binge drinking rates among Santa Monica youth. According to a summer 2015 survey of Santa Monica youth conducted by Harder+Company, an independent community research firm, 86 percent of local youth ages 16 to 20 indicated that alcohol is “somewhat” or “very easy” to get. The data also show house parties are one of the main points of access, with over 60 percent of respondents reporting they obtained alcohol from parties and other social gatherings.