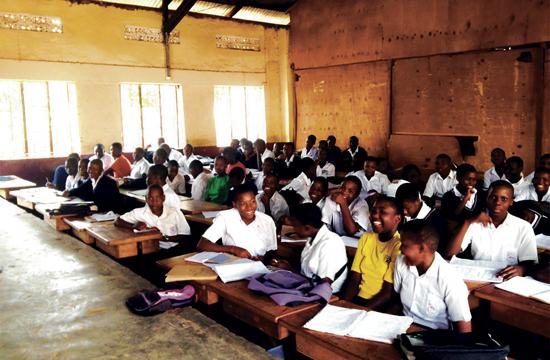 During his final year of graduate studies at the Koç University in Istanbul, Turkey, Santa Monica native Coby Schoffman traveled to Uganda to volunteer at the Kikaaya College and Vocational School, located in a small village north of Kampala. Schoffman felt that he hadn’t grasped enough on-the-ground life experiences as he would have liked to in the course of his studies, and hoped that this opportunity would broaden his exposure to the real world.

“I was studying conflict resolution and counter-terrorism,” Schoffman said, “and it was one thing to understand levels of poverty and scales of economy and conflicts around the world theoretically in the classroom, but it was another to experience it firsthand.”

The school is composed of over 700 students, over half of whom are orphans. Schoffman noted that there were no toilets or showers available to the community, as well as a lack of educational resources to support the student body. However, Schoffman said, the students were “some of the happiest kids that I’ve ever come across.”

Schoffman traveled to Uganda in January 2014, working there to extend aid to the school and improve its resources in the face of extreme poverty. He worked with the vocational students to construct a basketball court from scratch, and introduced the sport by teaching after-school basketball drills as well as physical education classes.

Additionally, he taught computer science classes, working through the challenges of outdated and unreliable technology, lack of internet connection, and a shortage of computers. Schoffman said that the entire trip gave him a new perspective on life itself. “After living on the school grounds and seeing the levels of poverty and day-to-day struggles that the community was dealing with, it’s not like you could just go back to your regular life and go about things like it never happened,” Schoffman said.

“One way or another, you feel obligated to extend aid to the community.” Schoffman emphasized the connection he made with the school community during his time volunteering, and said he still maintains relationships with the friends he met there. Upon returning to the United States, Schoffman was inspired to extend assistance to the Kikaaya community as well as other High Schools across East Africa through the creation of a 501 c 3 nonprofit organization called The Nation Foundation.

The nonprofit’s mission is to provide the students in these impoverished schools with equal educational opportunities by supplying them with the resources they need to succeed. In the past two years, the Nation Foundation has raised over $20,000, sent volunteers to these developing areas from a variety of countries (including France, Israel, and the United States), and allocated scholastic materials, school uniforms, and other resources to the hundreds of students it sponsors. Schoffman emphasized the nonprofit’s goal to allocate 21st-century technology to its partner schools in East Africa. The Nation Foundation has been able to donate a number of computers to the Kikaaya project (the nonprofit’s partnership with the school in Uganda), and Schoffman hopes to send more in coming months.

“For each school that we work with, there are going to be different needs that we cater to, depending on what the school’s resources are,” Schoffman said. In addition to partnering with Uganda’s Kikaaya College and Vocational School, the nonprofit has broadened its reach to schools in Tanzania and Kenya and plans to send volunteers to work in these areas over the summer. “We’re extending the reach of the organization this year to a new school in Tanzania, and we’re progressing better than I could have ever imagined," Schoffman said. “I hope in the upcoming years, our reach grows even farther and our budget becomes even larger.”

For more information head to: http://nation-foundation.org.