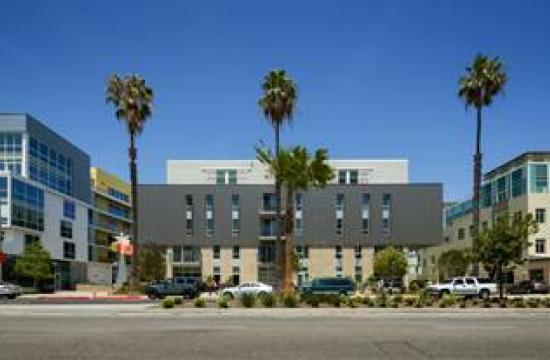 Ocean Avenue South, a residential mixed-use, mixed-income development, is a finalist in the 2016 Urban Land Institute (ULI) Global Awards for Excellence, widely recognized as one of the land use industry’s most prestigious award programs, according to Santa Monica City.

“We are proud that Ocean Avenue South, with more than half of its homes affordable to low- and moderate-income families, is the only Los Angeles-area property considered for the prestigious global award," said Andy Agle, Director of the City’s Housing and Economic Development Department. “Through the public-private partnership with Related California and Community Corporation of Santa Monica, 160 families have a place to call home that is affordable and part of a beautiful and vibrant project.”

Located in the heart of Santa Monica, just two blocks from the Pacific Ocean, Ocean Avenue South is a key component to both the revitalization of the Civic Center neighborhood, and the City Council’s strategic goal of maintaining an inclusive and diverse community, the City said.

More than half of the residences at Ocean Avenue South, a total of 160, are dedicated affordable homes, making it the largest affordable housing community supported by City financing.

“The property brings a diversity of uses to the former site of the RAND Corporation headquarters, including gardens, 20,000-square feet of retail and restaurant space, as well as a pedestrian walkway connecting Main Street to Ocean Avenue,” according to the City.

“It is a great honor to be considered for this global award, but it would not be possible without the City of Santa Monica’s overall vision,” said Bill Witte, Chairman and CEO, Related California. “This model for public-private partnership helped transform Ocean Avenue into a world-class neighborhood with new housing, retail, and amenities."

Twenty-six developments – two in Asia, six in Europe, and 18 in North America, including Ocean Avenue South – will advance to the final stage of the award, with a group of winners to be announced in October at the ULI Fall Meeting in Dallas. The winning projects will be selected by an international jury made up of ULI members representing a multidisciplinary collection of real estate development expertise, including finance, land planning, development, public affairs, design, and other professional services.

ULI’s Global Awards for Excellence program was created in 1979 to recognize real estate projects that achieve a high standard of excellence in design, construction, economics, planning, and management. The Awards recognize the full development process of a project. The criteria for the awards include leadership, contribution to the community, innovations, public/private partnerships, environmental protection and enhancement, response to societal needs, and financial viability, as well as architecture and design.