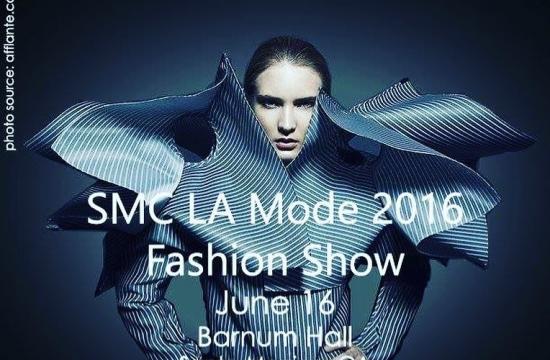 Students from LA and around the world – literally – have developed their collections in completion of their two-year fashion studies at SMC. So, from San Francisco to Sweden to Savannah, Japan, Mexico, Honduras, China to Chicago, Iran, Korea, LA to NYC, Turkey, and Algeria, this production proves fashion is truly global!

The evening will also pay homage to a woman who exemplifies the best of LA’s fashion industry – Ilse Metchek – the founding President of the California Fashion Association (CFA), Executive Director of The Textiles Association of LA (TALA), as well as long-time SMC Fashion Advisory Board Member. She is the most ardent supporter, educator, philanthropist and organizer – the voice of LA Fashion, and fittingly will receive Santa Monica College’s 1st Annual Style and Substance Award.

Alums unable to attend – for logistical reasons – include SMC Alum Daniela Gerschwendtner, costume designer of “Dancing with the Stars” and “America’s Got Talent,” who will be in Sarasota, Florida (June 16th) costuming for the ”Maks and Val Tour”; still in NYC – Jeannine Braden – sales director of Thomas Wylde, plus stylist, creative director and founder of Fred Segal Flair & Brentwood Country Mart’s Post 26, and Svetlana Shigroff, artist, stylist and costume designer, working overseas on projects with Empire of the Sun and Kimbra.