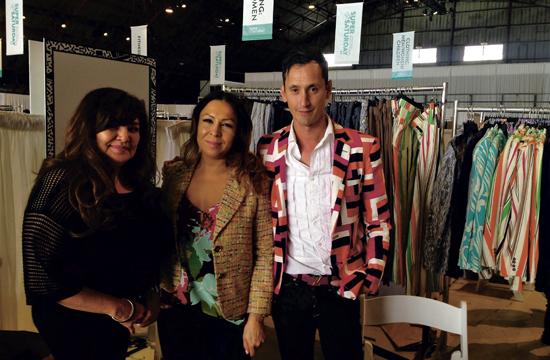 For the third year in a row, the Ovarian Cancer Research Fund (OCRF) hosted their Super Saturday fundraiser June 11 at the historic Barker Hangar at Santa Monica Airport.

The large Barker Hangar was brimming with vendors and shoppers alike, united by a love of fashion and charity.

“It’s a great cause,” said Jacquie Jaeger, who was representing Zobha, a women’s fitness brand.

Christina Vu and Raina Skye, both of whom were representing vendors, cited support for OCRF as one of their primary reasons for attending.

OCRF is the oldest and largest charity in the United States dedicated to funding ovarian cancer research. Super Saturday is its prominent fundraising event, raising $3.5 million between the Santa Monica showcase and a matching counterpart in New York.

The day at SMO began with a red carpet, that saw Melissa Rivers, Lisa Rinna, Brad Goreski, and many more names in TV and fashion hit the sale.

Hosts Rachel Zoe and Rodger Berman with Molly Sims and Scott Stuber led the event, which included a broadcast on the QVC network “QVC Presents Super Saturday” – a first for the west coast.

“I really like the 1940s vibe,” Skye explained. Thanks to the hangar’s open floor plan, the event had an old-school look, and felt massive.

Catered food was available to guests from both local chefs and restaurants, with many brands on-site alongside informational booths and activities for children.

Tickets were $75 for general admission and $50 for children ages 6-16, VIP tickets featuring exclusive benefits cost $200, with proceeds going to the OCRF and goodie bags and extras included. For more information about the OCRF and upcoming events head to: ocrf.org.