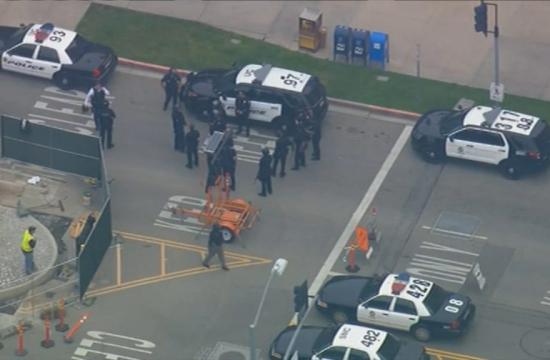 Two people were killed today in a shooting at UCLA, prompting a university-wide lockdown, that has just been lifted, as police swarmed the Westwood campus in search of a possible shooter amid the possibility the deaths may have been the result of a murder-suicide.

The shooting was reported shortly before 10 a.m. in Boelter Hall, which is part of the Samueli School of Engineering and Applied Science, according to the university. The Los Angeles Police Department confirmed that two people, both male, were found dead in the engineering building. It was unknown if they were UCLA students, staff or visitors.

Several media outlets reported that a suicide note was found near the victims, while NBC4 reported that a handgun was also found, but police could not immediately confirm the reports.

"There is that possibility (of a murder-suicide), but we haven’t confirmed that yet," UCLA police Chief James Herren said about 90 minutes after the shooting was reported.

"It is certainly possible that one of the victims is the shooter, but we don’t know that yet," he said.

Police were not taking any chances, conducting an exhaustive, room-by- room search of the Boelter Hall and other buildings, seeking out not only a possible shooter but also other potential victims.

The entire campus was placed on lockdown and students were advised to shelter in place. A large number of police and fire units swarmed to the Westwood campus, and paramedics were seen standing by with gurneys. The FBI and federal Bureau of Alcohol, Tobacco, Firearms and Explosives both dispatched agents to the campus.

The Los Angeles Police Department went on a tactical alert in response to the shooting reports.

Students received "Bruin Alerts" from the university notifying them about the shooting and were told to remain sheltered in place. Via social media, some students reported hunkering down in restrooms or classrooms.

As police cleared classrooms, students were seen walking from buildings, often with their hands raised and some being subjected to pat-downs as they left.

Fairburn and Warner elementary schools and Emerson Middle School, all of which are located near UCLA, were placed on lockdown, according to the Los Angeles Unified School District.

Herren said there were "literally hundreds of police officers and agents" on the campus, including officers with the Santa Monica College Police Department and crews from the Los Angeles Fire Department.

"We will continue to go until are sure that this campus is safe and if there is an outstanding suspect we will have that person or persons in custody," Herren said.