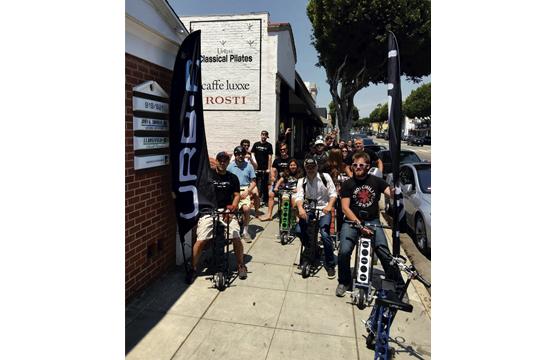 About 10 years ago, there was a small wave of hype for an electric scooter called the Segway. However, hype quickly died down when people realized they looked ridiculous on it, to the point of movies like “Paul Blart, Mall Cop” satirized the vehicle altogether. At a glance, it seems like history is to repeat itself, with this new vehicle called the URB-E, standing for “urban electric.” However, that is not so much the case here as it was 10 years ago.

The name, pronounced “erb-ee” sounds like the “Furby,” a toy that gave many a child nightmares in the early 2000s. The thing itself looks like a stepladder with wheels and a seat. However, that is where the downsides end for the most part.

The scooter has been gaining traction as of late, having been featured on “Good Morning, San Diego” Sunday as part of a father’s day special. However, that did not change the fact that many citizens of Santa Monica were baffled on Saturday as the URB-E brigade that I joined sped down Montana Boulevard toward the beach, with several witnesses asking questions. This caused us to stop and inform people on multiple occasions, as well as pass out flyers. It was like an informative, environmentally safe biker gang, without the noise or the tattoos.

The idea for the vehicle came around 2013 when Grant Delgatty (later CCO of the company) was an instructor at the Art Center College of Design in Pasadena. He noticed that young people taking public transportation needed a convenient way to travel that last mile, and began prototyping the URB-E in his garage, before teaming up with Sven Etzelsberger, former head engineer at Porsche. The scooter itself has been in full production since August 2015, being made and sold in Pasadena.

The URB-E itself is made out of materials like carbon fiber, aircraft aluminum, and stainless steel. It gets about 20 miles per charge (which takes around four hours,) and boasts a top speed of 15 miles per hour, and runs a price tag of $1,500, with financing options available. It is legally classified as a bike, and as such requires no license, although it is recommended for ages eighteen and older, as well as a helmet while riding. It features an ignition system and kill switch to prevent thefts and crashes, as well as being customizable, with accessories like phone holders, cup holders, and attachable baskets available. I saw many different iterations of the vehicle at the meet-up I attended, with many people customizing the thing to suit their needs.

As a college student, this may be an alternative to the ridiculous and aptly misnamed “hoverboard” that can be seen on most campuses. It also works well in a town like Santa Monica, where the parking is ridiculous, so that a person can park further away and then URB-E their way to their destination, before folding it up nicely and storing it where they need to. The price tag may be a little off putting to some, but it was quite a fun ride.

For more information, or to order one yourself, visit urb-e.com.