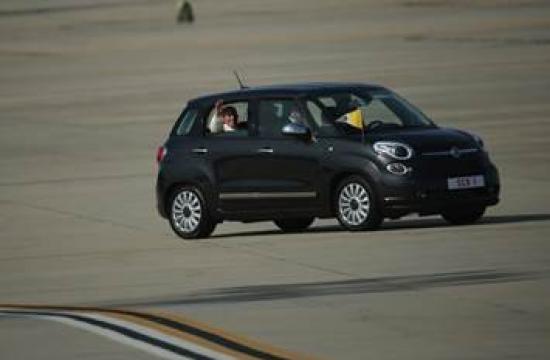 Want to Buy the Pope’s Fiat? Perhaps a 1995 Ferrari F50? The collector car community is set to once again descend on Santa Monica’s Barker Hangar this weekend, June 25 and 26, for one of the nation’s leading car auctions.

“This year’s sale, which also doubles as one of the area’s leading classic car shows, will present a wonderful showcase of automotive history and design, lifting the gavel on a handpicked collection of 300 quality vehicles and select automobilia,” organizers said.

The Santa Monica sale promises an eclectic mix of automobiles representative of diverse Southern California tastes, organizers added:  European and American sports cars, prewar classics, hot rods and customs. Beyond the automobiles, the sale will also present assorted automobilia, including a collection of vintage movie posters, billboards and advertisements, a variety of René Lalique glass mascots, and even a custom-painted Parrot surf board.

“In just three years, the Auctions America event has emerged as a new highlight on the Southern California automotive scene, raising the bar for collector car auctions with its quality and diversity of product, and innovative presentation,” organizers said.

The Fiat 500L used by His Holiness Pope Francis during his trip to New York City in September 2015. Selling to the highest bidder, all hammer proceeds from the Fiat’s sale will benefit the Archdiocese of New York and in turn be donated to support a series of Catholic charities (Est. $75,000 – $100,000)

Built to offer customers a Formula 1 racing experience on a road-legal platform, the F50 combines sleek design with blistering performance; powered by a 4.7-liter, 513-hp V-12 engine, it is capable of accelerating 0-60 in just 5.2 seconds with a top speed of 202 mph. Finished in traditional Rosso Corsa over a two-tone black and red interior, the featured F50 is one of only 55 U.S.-specification examples built. The recipient of a full major-service, which included replacement of its fuel bladders, it has been driven sparingly since, leaving it ready for its next owner to drive and enjoy. Recently granted Ferrari Classiche certification, it would make a great addition to any collection of Maranello’s finest. It leads a group of no less than 20 Ferraris slated for the Santa Monica podium.

Porsche’s first true “supercar” – a 200-mph road car of which only 329 were produced – the 959 was an instant success: rare, well-built, and extremely fast, all ingredients making it a highly sought-after collectible. Originally purchased in Germany by professional Porsche driver, Max Moritz, the featured 959 was imported to the U.S. by its second owner in 2001 and made legal to California guidelines. A well-preserved, well-documented ‘Komfort’ example, it comes to auction just two owners and 7,500 kms from new, accompanied by original tool kit, jack, spares and books. A short video of the 959 in motion is available for viewing here: bit.ly/1TLxMFZ.

For those unable to attend the auction in person, Auctions America offers a broad range of remote bidding options including Internet, absentee and telephone bidding, and the auction will stream live online at auctionsamerica.com, providing real-time coverage of the event.

Admission: Bidder registration is $100 and includes an official auction catalog and admission for two (2) to the preview and auction. An event pass is $20 per person.