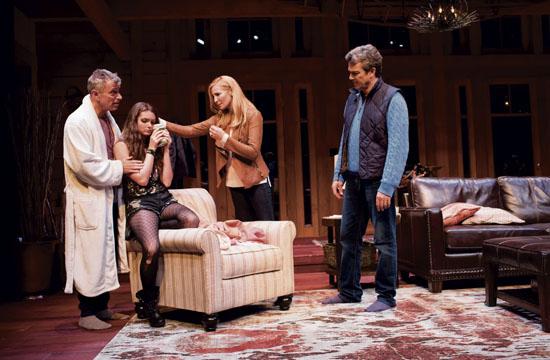 In case you might be wondering about the meaning of the title of Alexandra Gersten-Vassilaros’ dramedy* “Big Sky,” an immediate thought could come to mind. Maybe it’s the expansive view from the exquisite Ritz Carlton condominium setting for this play, which is in the swanky ski-country of Aspen, Colorado? Skydiving perhaps? Long plane trip? You would have guessed wrong and the meaning will be revealed later.

What we do know for sure from the opening scene is that Jack (Jon Tenney) and his wife Jen (Jennifer Westfeldt) are being hosted by the Pederson Fund, a potential employer, and have been ensconced in this magnificent chalet beautifully designed by Derek McLane. Falling light-snow can be seen through the large windows. An unseen window is a panoramic view of the bucolic mountains. Jen is the first to come in from the cold and immediately glues herself to her cell phone which signals incoming text messages. This continues throughout most of Act 1. She has a big secret.

Jack arrives and is delighted at the prospects of working for this big company. He is a Type A personality – outgoing and aggressive. He was let go from his last job and really needs this new situation to bolster both his ego and bank account. He, too, has a secret. Jack breaks open a box containing $400 bottles of wine, compliments of his hosts and pours two glasses of wine. In a funny piece of business, he samples different chocolates, taking a small bite and then putting them back into the box. He makes an awkward attempt at initiating lovemaking by putting his hand on his wife’s breasts but is quickly rebuffed as his she recoils almost in horror. Jen calls it unromantic to which Jack replies: “I put my hand on your chest and hope for the best.” So, it quickly becomes evident that this bucolic setting is in sharp contrast to their 18-year marriage, which seems to be coming apart at the proverbial seams. Lots of drinking ensues with Jen constantly reverting back to her cell phone to check the text messages, which are coming in at a rapid rate. Who are all these texts coming from? In what is probably a symbolic gesture, Jen keeps forgetting to buy groceries so the chalet-designed condo is as barren as her marriage.

Jen’s close friend and confidant is her gay buddy Jonathan (Arnie Burton.) He has been invited to join the family for the weekend and is the voice of reason, for the most part, that is. He is overwrought when Jen reveals that she is having an affair and tries to persuade her that it’s just a passing fancy since her lover is a patient in hospice where she volunteers. That said, could a miracle be afoot? Arnie Burton gives a wonderful performance as the wisecracking Jonathan. He breathes comedic life into the proceedings, and is a master of the hilarious “slow take.” Despite his let’s party demeanor, he is still grieving over the death of his partner from cancer and uses medical marijuana to assuage his despair. He is also apprehensive about Jack’s commitment to invest in his pillow company. Jonathan has brought his stash which will change the outcome of everyone’s lives, but that’s all I’ll say about that.

Rounding out this troubled family is Jen and Jack’s 17-year-old daughter Tessa, an outspoken rather rude young lady who is not blind to the negative dynamic between her parents. She too has a secret, which she shares with poor Jonathan who is on the verge of confessional overload and probably wishes he could shout TMI, TMI! She is rebellious and reveals that she is in love with Catoni, a 20-year-old Native-American porter who works in their New York apartment building. She is an A student but has decided that instead of going to college, she is going to take a spiritual road trip across the country with her boyfriend. Oh yes. I should share with you that Catoni means big sky, hence the title. At one point, Tessa convinces Arnie to let her have a hit of his joint which at first he refuses, but she wears him down and gets to take a couple of drags. Gersten-Vassilaros sprinkled in comic lines throughout Act 1 such as Arnie to Tessa: “You’re too young to feel anxious.” Tessa: “Young is the new old.” When he’s not looking, she grabs the bag, puts it in her purse and, at the insistence of her father, rushes off to meet with the daughter of the gentleman from Pederson Fund who is in the process of crafting a final employment offer. This deed definitely does not go unpunished and involves a buffalo. That’s all I’m going to say about that.

Following the playwright’s Act I text, director John Rando keeps the action moving nicely elevating the proceedings slightly above a sit-com. Rapid-fire jokes are executed in a timely manner but we never really get much below the surface. Act II, however, is an entirely different play, and could best be described as a blood bath of accusations and incriminations. Technically, one must wonder why almost three-quarters of Act II is performed in very low lighting making it difficult to actually see the action unfolding on stage. Yes. I know there is a power outage, but some directorial license could have been employed to compensate for the lost electricity.

The production values are top notch including Costume Design by Denitsa Bliznakova, Lighting Design by Jaymi Lee Smith, and Jon Gottlieb’s wonderful Sound Design including the blizzard’s howling wind which might make you reach for your sweater.

As far as performances, Tenney does a believable job as Jack, a macho man sinking deeper and deeper into a pit. Robinson’s Tessa is a just a bit “Hollywood” and tries too much to go for the laughs. Despite that, she does having some believable moments. Westfeldt as Jen gives the weakest performance. She wines her way through the dialogue, delivering the lines in a sing-songy, monotonous tone, making her vocal performance stilted and quite tedious.

Dramedy: A comedy and drama

TMI: Too much information