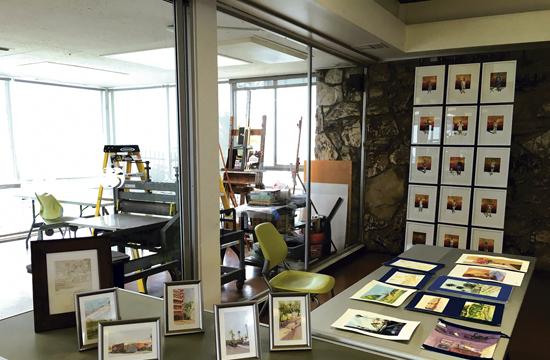 Camera Obscura Art Lab Saturday began showcasing the watercolor paintings of local sculptor and painter Frank Valdez. This is the culmination of Valdez’s residency at the Art Lab, which included teaching a class titled “Drawing What You See,” as well as producing one or two portraits a week with artistic techniques with which he was initially unfamiliar.

“He set up a punishing schedule,” said Naomi Okuyama, who works for the Cultural Affairs Division of the City of Santa Monica.

Since the Camera Obscura Art Lab likes to encourage its residents to experiment with new techniques, Valdez was forbidden from creating works from oils or sculpting materials, and instead was required to utilize watercolors.

His portraits, of people he encountered in Santa Monica, comprised an exhibit he titled “Beachmonger.” Initially, he was planning on painting landscapes, but was frequently approached by diverse groups of passersby. Inspired, he started asking if they had ever modeled for a painting before. They then became the subjects of his portraits.

Each of his subjects are framed with a near-identical backdrop, that looks sort of like a polaroid, but with a black, red and orange Rothko-esque design where the photo should be. Valdez explained that this was inspired by the prevalence of squares in modern existence, on Instagram and in other artificial human constructs. His subjects’ humanity is juxtaposed against this purposefully artificial square backdrop.

“Some people fill it. Some don’t, and that’s fine,” said Valdez.

In portraying a wide cross-section of residents – 30 portraits in all are on display – Valdez imagines that this exhibit would make an intriguing time capsule, our modern ways of existence looking weird or foolish to spectators 100 years from now.