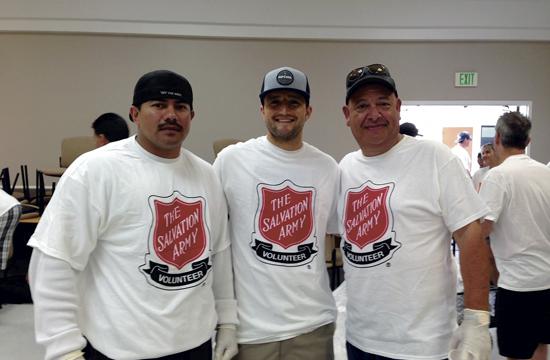 In response to Los Angeles’s escalating homelessness crisis, the Salvation Army organized a team of more than 50 volunteers to hand out prepared meals to Santa Monica’s homeless population this past Saturday.

According to the 2016 Point in Time (PIT) count, Los Angeles District 11, which includes Venice Beach, has a homeless count of 2,529. Santa Monica City recorded 728 homeless individuals in its PIT count earlier this year.

In an attempt to ease the situation for those on the streets, volunteers gathered at the Salvation Army’s Santa Monica Corps Center to prepare bagged lunches to be handed out. Those present were organized into one of three groups: the CLARE foundation alumni association, Morgan Stanley employees, and regular Salvation Army volunteers.

Once lunches were prepared and gathered into large wagons or bags, an organizer quickly briefed some volunteers on what they should expect moving forward. Some of the people they would offer food to might find it demeaning, and in that case, they should just move along and respect that person’s point of view.

Volunteers then set out on foot in different directions, to cover different areas in which Santa Monica’s homeless population often gathers. Individuals would sometimes branch off from their group to offer a lunch to someone they noticed might need it. In almost all cases, recipients were happy to accept.

Noah Weiner, who is a Corps Assistant at the Santa Monica Salvation Army center, organized the event to provide an opportunity for locals to volunteer and give back to their community. Weiner went through the Salvation Army’s drug and alcohol program, and has since volunteered for them for eight years.

“Along with God, the Salvation Army was the vessel used to save me,” Weiner said.

Providing lunches to the homeless is his way of both engaging his community to give back to those in need, as well as engage in the Salvation Army’s philanthropic mission.

“If we help even just a little bit, that’s what we do on a daily basis,” Weiner said.

For more information about the Santa Monica branch of the Salvation Army, visit salvationarmy-socal.org