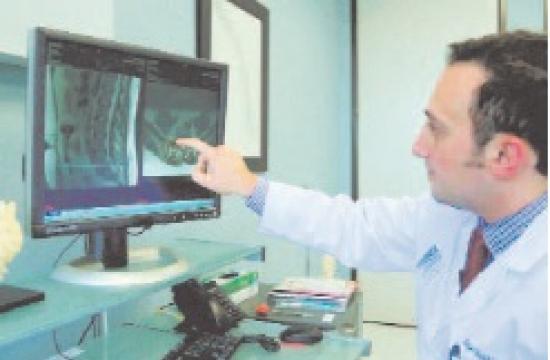 Golfers are hardly strangers to back pain. Most, in fact, come to anticipate it at some point in their lives. However, when Mark took a swing one afternoon, he knew something was different. This time the pain in his back was more severe and it radiated all the way down his right leg. Not knowing what else to do, he limped through the rest of the course and went home. A few days later, the pain increased to the point where he could no longer manage, and Mark went to the emergency room. His MRI showed a ruptured disc affecting one of the nerves traveling to his legs.

Having a ruptured or herniated disc (also called a slipped disc) can be very painful, but how can you differentiate this from pain caused by other conditions? The key to this lies in understanding how the disc rupture can affect your nerves.

The human spine consists of bones called vertebrae stacked on top of one another in a configuration that supports the weight of your body and protects your spinal cord and nerves. In between each set of bones is a disc which acts as a shock absorber. Each disc is composed of an outer shell of strong material and an inner core of a jelly-like substance called the nucleus pulposus. As a disc ages or becomes damaged due to trauma, you may develop a hole in the outer ring, allowing some of that jelly-like nucleus pulposus to escape and squeeze out. For a quick visualization, imagine what happens when you squeeze a jelly donut and see the jelly squirt out the hole in the side.

The herniated disc can affect nerves roots in one of two ways. The first and most obvious mechanism is through sheer pressure. As the disc ruptures and the nucleus pulposus squirts into your spinal canal, it can pin your nerve roots up against the borders of your spinal canal, which is made of bones and tough ligaments, causing physical trauma to the nerve roots. In addition, the chemical make-up of the nucleus pulposus is very irritating to nerves and causes a large inflammatory response when it contacts a nerve root. This explains why even small disc herniations, which do not exert a lot of physical pressure on nerve roots, can still be extremely painful.

Symptoms will vary depending on the location of the ruptured disc. A ruptured disc in your neck may cause pain around your neck, shoulder blade, or running down

your arm. Disc rupture in your low back can cause low back pain and sciatica (buttock, and leg pain that shoots down either leg). Some patients describe it as electricity or feeling like their leg is on fire. Other symptoms include pins and needles or numbness and tingling. More severe disc ruptures can result in weakness in the muscles in your arms or legs as a result of pressure on the nerves controlling those muscles. In extreme cases, they can cause loss of control over your bowel and bladder. Your pain will tend to increase with coughing or sneezing and with sitting down.

In order to make the diagnosis, your doctor will perform a history and physical exam to see if your symptoms are consistent with a ruptured disc. If appropriate, an MRI of your neck or back will show the exact location and size of the herniation.

With the goal of relieving discomfort and preventing any permanent injury to your nerves, treatments range from medications and physical therapy to epidural steroid injections or surgery. Depending on the location and size of the disc, surgical intervention – ideally performed by a spine surgeon experienced in microscopic techniques – may consist of removing only the piece of the disc that has herniated or removing the entire disc.

The key is getting a proper diagnosis early, so your doctor can determine which treatment will prevent your condition from worsening. As with most injuries, the sooner you take care of a herniated disc, the more likely you’ll be able to recover without lasting pain or damage.