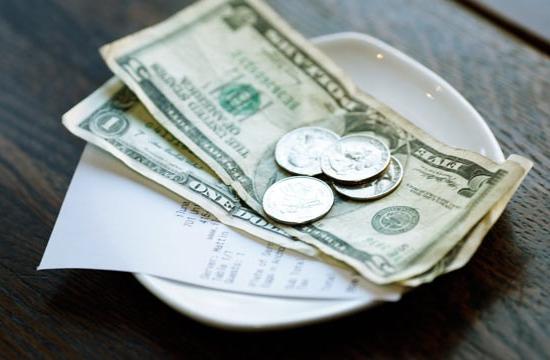 The next time you go out to eat, the most complicated part of your meal may be how to figure out the tip.

For the past several years restaurant owners and employees have tangled over low wages, medical coverage and whether to divvy up tips. To diners, that’s left a confusing puzzle of arithmetic at the bottom of the bill, which can include a 3 percent medical insurance surcharge, a tacked-on 20 percent service charge – and sometimes even a line after that seeking a tip.

It’s enough to make you start cooking at home again.

A ruling from the 9th Circuit U.S. Court of Appeals in March made tipping more complicated for everybody in the restaurant industry. There are hundreds of restaurants in Santa Monica; about 300 belong to the Chamber of Commerce. So it’s easy to see how the ruling affects many people and their families.

The question for the court seemed simple: could restaurant employees in the “chain of service,” such as servers and busboys, be required – or even allowed – to share their tips with back of the house staff such as chefs, line cooks and dishwashers. The Court’s decision: Tips belong to those in the chain of service. Thus, restaurants using a tip pool will need to ensure that none of their back-of-the-house staff – line cooks, dishwashers, expeditors, or any other staff that may not fall within definition of “customarily and regularly tipped employees” – partake in sharing the tip pool.

Called “tip-pooling,” the practice is, at its best, intended to share the benefits of good service with the team of people who directly contributed to a diner’s experience. At worst, it’s slyly used to ease the increasing costs of doing business – and to make up for the increasing minimum wage – for employees who may not be entitled to participate in the tip-pool.

The 9th Circuit’s decision is still open for revision or appeal. Just to be clear, some tip pooling is permissible, but not to the extent that some restaurateurs are pushing it. Some Los Angeles restaurant owners have tried to redistribute as much as 50 percent or more of waiters’ tips to other staff to reduce their own out-of-pocket costs. Aside from strict limits on who can participate in a tip-pool, what little law that exists on a reasonable amount to be distributed to back-staff at least makes clear that anything close to 50 percent is illegal.

That’s why California law does not explicitly prohibit tip pooling, only requiring that an employee’s contribution to the tip pool must be reasonable, fair and equitable. The state’s labor code does not currently contain any statute that directly resolves the question of what counts as reasonable, fair or equitable. However, an opinion letter from the Labor Commissioner in 2005 set some parameters, stating that a “tipping pool policy was permissible where it provided that employees receiving the tips contribute 15 percent of the actual tips to the tip pool.”

A California Appeals Court justice in 2009 also provided guidance on what’s considered a reasonable and fair tip pool percentage, reasoning that a tip reflects the efforts of everyone who contributed to the dining experience; and, therefore, employers could force wait staff to contribute to a mandatory tip pool. The case, Etheridge v. Reins International, involved a restaurant employer who based tip pool requirements on the restaurant’s gross sales. The plaintiff in Etheridge was forced to pay half of his tips into the restaurant’s involuntary tip pool. The appeals court justice expressly opined that a 50 percent requirement “would appear to be an amount well in excess of any common industry practice for tip pool contributions.”

One way restaurateurs are trying to escape the tipping dilemma is by eliminating tipping and adding a 20 percent service fee to a diner’s bill. This is legitimate, and puts the employer in control of that money, which is taxable; and it can be passed along to all staff by whatever percentages the owner decides. But, it may not incentivize the best service or leave the customer feeling validated.

Moving forward, diners may take more interest in how much their server receives from the tip. More importantly, restaurant owners should review their tip policies — particularly if they have a tip-pool arrangement — and make sure they are complying with recent changes in the law. And restaurant employees should also be aware of their rights, and make sure that they are being treated fairly and legally for their hard work.