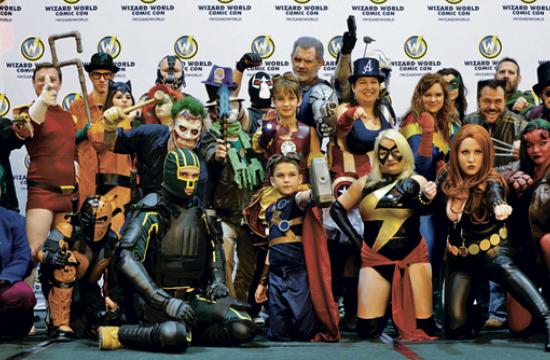 One thing about trends is that evidence that they might be bad for us is too often late in arriving. Take those exploding hover-boards for example. You had to actually shell-out $300 and ride one for a while to realize that the overseas toy counterfeiters knocking them off like crazy had been so eager to make their money they didn’t dwell on the dangers of lithium batteries. It was “Liar liar…” but it was the customer’s pants that were literally on fire.

Monday’s LA Times hinted at a new “trend” and some possible ramifications related to Comic-Con and the dedicated fantasy-content fan base that pays money be present where everybody else who is like them is attending. I mean, even at something like Electric Daisy Carnival you get to hear some music and see some trippy lights. Comic-Con is one huge live-on-stage infomercial for sci-fi TV shows and fantasy films. Fans pay to hear about upcoming entertainment products, and then pay again later to enjoy the (cable) series or movie. Of course there’s “merch” for sale but… again, they pay to get in to buy all that heavily trademarked, promotionally-oriented – okay, I’ll stop now.

The LA Times Calendar section piece suggested the following: That while the event of fans, fan-boys and cosplay folks (the Comic-Con nation, if you will) speaking out strongly about film franchises and the story turns contained in them was nothing new, somehow the fan’s sense of entitlement had ratcheted-up to a new level that’s presenting some complications. Such as dudes on social media making sexist and threatening remarks related to specific cast members of “Ghost Busters” and a kind of Twitter “white noise” about pending projects that cause directors like Joss Wheadon (two “Avengers” movies) to simply disengage from the online conversation.

Now, ignoring those who spread harsh social media while wearing green wigs and rubber masks seems to make practical sense, … at first. But there’s a problem with alienating the very base for your entertainment products: They might turn on you and not buy-in on your next project.

Then again, Hollywood is the home of our planet’s most strategic recyclers. When the negative social media regarding the new all-female “Ghostbusters” (currently in 4th place as I type this) started, the film’s potential profiteers adjusted the pre-release narrative. Now it wasn’t about an all-female remake; it was about the reaction to the idea of an all-female remake. Not to put too blunt a point on it, but the publicity narrative for “Ghostbusters” became “If you think women should be treated fairly online and gender shouldn’t be a hindrance to casting roles, then vote for Hillary! Uh, I mean, see “Ghostbusters.””

Joss Wheadon, commenting for the LA Times piece, cited a specific impact in all this that is near to my own writer’s heart: “I would like always to have a dialogue with the audience, but at the same time you can’t create by committee.” Wheadon’s statement overlooks that fact that by the time a $100 million-plus “tent pole” fantasy film sequel has been approved for production, a daunting committee process has already taken place.

Still, there are some intriguing things to contemplate in a near-future in which the consumers of entertainment content would quite simply dictate the next product they would like to see produced.  Previously, a costly guessing game has taken place wherein studios assume that more is better as far as the appetites of the audience. (On all this, get with the producers of “Alice through the Looking Glass.”)

Now, via social media and hook-ups like Comic-Con, producers can get a much better idea if the core base is going to be excited about that ‘more’. That might be fine, if big-budget sequel-making didn’t use up funds that might otherwise have been utilized to make one or two well-crafted small films about something human and meaningful rather than “The Avengers: Another Big Thing Wants to Control Earth!”

There’s a political party that just spent millions of dollars crowning a candidate that even those deep in their ranks didn’t like.  But they didn’t listen to those seasoned, veteran voices. They let the political fan-boys, if you will, dictate the next product. Millions are hoping this ‘feature’ will tank.

The essence of true creativity is that it is guided by a vision that is not the same as that of every single person with the money to buy a movie ticket or the time to watch a TV show. That’s how the attendees at Comic-Con acquired their power in the first place. To even understand the need for Batman and Superman to fight each other, you had to have the special glasses. But seeing the real world doesn’t require those. And until Ultron or some other digital bastard moves us all to another planet, we still require well-crafted stories about the lives we’re leading here in that real world. That people dressed as cartoon characters are exerting their will in a way that might prevent even one of those stories from ever reaching the screen, well… that to me sounds like one scary fantasy film.