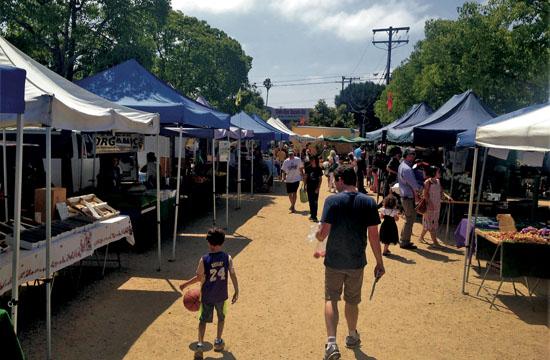 Every Saturday from 8:00 a.m. – 1:00 p.m., one of Santa Monica’s four farmers markets is held at Virginia Avenue Park. Known as the Pico Farmers Market due to its central Pico district location, families from all over town gather for fresh produce, plants, coffee, prepared foods, music and more.

This past Saturday saw a larger turnout than usual, even in the early morning, possibly due to people visiting from out of town for Fourth of July weekend.

“Today there’s more people than I expected, it being a holiday weekend,” said Goyo Rodriguez, who’s been a vendor at the Pico Market for more than 20 years.

The market is adjacent to the Virginia Avenue Park playground, which was hosting a birthday party at the same time, and many young children accompanied by their families were enthusiastically making the way around.

A bluegrass band playing covers of American folk standards, and a couple local vendors selling cooked meals were drawing especially large and enthusiastic crowds. However, produce being sold by more than 30 different farmers was the main attraction.

The Pico Farmers Market was originally established in 1982 following encouragement from community leaders throughout the Pico District. Today, people from all over the Westside continue to gather there with other members of their community.