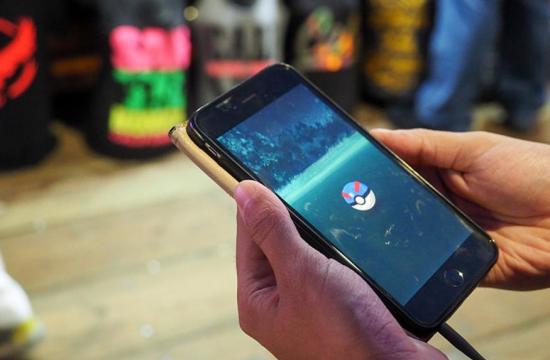 By Atlas Novack and Jennifer Eden

Midnight Tuesday saw thousands descend on Santa Monica Pier despite everything being closed and the attractions shut-down for the evening. Their mission? To catch Pokémon.

With eyes glued to their phones, eager Pokémon Go players are flocking to Santa Monica at all hours of the day and night in an effort to catch highly-sought after fictitious creatures and move their way up in the game.

“We came all the way from Long Beach,” 17-year-old Val told The Mirror. “We heard the Pier has rare Pokémon like Electabuzz and Dratini, stuff you can’t find where we are.”

Santa Monica is a hot ticket in the world of Pokémon Go, brimming with PokéStops, and rare Pokémon.

“I hadn’t heard of this game until my son told me,” said Santa Monica local Jerry O’Neal (43), “but we’ve had a great time together hunting for these things, and it’s even getting him to go outside!”

Pokémon Go is an augmented reality (AR) version of the popular games, which debuted in the 1990s with Pokémon Red and Blue. It’s a mobile app using a smart phone’s camera that allows you to capture little critters, which are projected on the background of whatever is in front of you. The more you capture, the more experience points you get, and the cooler you become.

Looking at the Pier or even the Promenade you can spot droves of anywhere from two to 10 people at a time, alternating between looking at their phones and walking with purpose, trying to get the Pikachu (a Pokémon character) that’s 300 yards away.

The game features different Pokémon of different “types” based on the geographic location of where the player is, and that is what makes the destination of Santa Monica interesting.

At the Santa Monica Pier, you can find a lot of water-type Pokémon due to the ocean, as well as electric-types, due to the attractions such as the Ferris wheel or the rollercoaster. By contrast, adjacent wooded areas like a park, spawn bug and grass-types.

Certain landmarks, called PokéStops, allow players to pick up items by swiping the screen as they get close to it. Often time stops can be major landmarks, but they also feature a lot of street art.

This encourages travel in order for the player to get more items and experience, but also sometimes allows the player to catch more Pokémon, because players can drop what are called lures, which causes a PokéStop to rain cherry blossoms on the character’s screen.

The downside: there have been incidents of people dropping a lure on a remote PokéStop, and then mugging people as they come to get their items and Pokémon, much like a predator.

The negatives aside, with new features added regularly, and the game grossing on average $1.6 million a day, Pokémon Go may be here to stay. It’s getting young people to go outside, form alliances and friendships, and perhaps even restoring a sense of community in an at-times, fragmented gaming world.

Water Board for Pollution By Jennifer Eden

Los Angeles Waterkeeper filed a lawsuit Monday against the California State Water Resources Control Board and the Los Angeles Regional Water Quality Control Board for its decision permitting excessive copper and lead pollution in the Los Angeles River and its tributaries. According to LA Waterkeeper, the State and Regional Water Boards’ actions greatly relax existing regulations controlling the amount of lead in the river and increase the legal limits for copper in the river by up to 1,000 percent. Both Water Board’s approved a set of new standards – known as site-specific water-quality objectives – that override more protective water quality standards.

According to LA Waterkeeper, these objectives are often designed and conducted by polluters with a financial interest in weaker water-quality standards. The organization says that the new objectives for copper and lead are so weak that treatment of stormwater for these pollutants would no longer be required. Sadly, both copper and lead are toxic to aquatic life and humans.

In this case, the studies supporting the dramatically weaker standards were paid for and overseen by the cities that line the river and its tributaries, as well as Caltrans and Los Angeles County. Local and state agencies can be liable for permit violations if they discharge excessive pollution into the river.

“The State Water Board and Los Angeles Regional Water Board failed to adequately respond to public input, sweeping all criticisms of the weakened standards – and the flawed studies on which they are based – under the rug,” said Bruce Reznik, Executive Director of LA Waterkeeper. “We are drawing a line in our waters and saying no to policies that take our water quality back two decades.”

The case marks the first time any organization has legally challenged the scientific validity of studies used by the State Water Board to justify water quality standards.

“Rather than enforce existing standards against polluters, the State and Regional Water Boards tried to redefine water pollution. This type of water management is irresponsible and creates a ripple effect across the state,” added Reznik. “We demand better standards for the people and wildlife that depend on our waters.”

“The studies rely on rosy assumptions,” said Dr. Rita Kampalath, science and policy director at Santa-Monica based organization Heal the Bay. “The Board has left it in the hands of the dischargers to make sure that these new standards are adequately protective without making sure that the studies used are as thorough and ensure public safety.”

Reflecting on the long-term health of the river, Marissa Christiansen, senior policy director for Friends of the Los Angeles River, added that, “any actions amending water quality standards for the Los Angeles River must be considered in the context rehabilitation and restoration to assure that the river access and ecological health is not impeded.”

Los Angeles Waterkeeper is filing the lawsuit under the California Environmental Quality Act, the Porter-Cologne Water Quality Act and the federal Clean Water Act and seeks to reverse the approval of the site-specific water quality objectives. The original and more protective water-quality standards for copper and lead would then be restored.

Santa Monica Mayor Tony Vazquez will host local youth in a Play Ball clinic as part of the United States Conference of Mayors’ continued support of the Play Ball summer initiative which focuses on the fun nature of baseball and softball and encourages and active and healthy lifestyle for kids in all communities.

During the summer of 2016 mayors are implementing the initiative throughout cities with the goal of strengthening the connection of communities with the national pastime.

The City of Santa Monica will conduct the Play Ball clinic on July 28 from 1 – 3 p.m. at the Clover Park main field, 2600 Ocean Park Blvd. All boys and girls ages 7-16 are invited join in. Local coaches will teach fundamentals and instruct drills. Players are encouraged to bring their own glove if they have one.

Mayors across the country are hosting similar activities to engage citizens, families and city departments to organize community events, the City said. These activities are focused on exposing children to the sport of baseball and softball and will provide a fun opportunity to remain active throughout the summer.

“I think this Play Ball Clinic is a wonderful opportunity for Santa Monica youth to come together and be active during the summer,” said Mayor Tony Vazquez. “Most of all, I want them to have fun learning the fundamentals and meeting other kids who share their passion of this great sport.”

Anyone interested in attending can RSVP by July 26 to communityrecreation@smgov.net or call 310.458.8300.