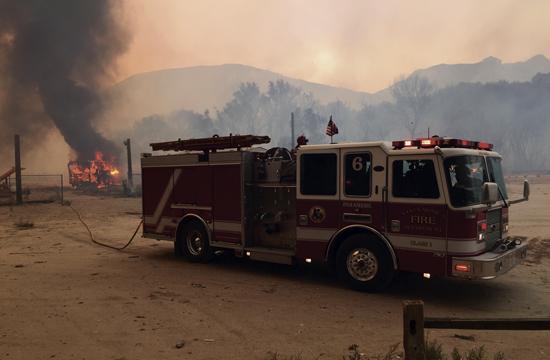 On Saturday morning, Santa Monica residents exited their homes and were shocked to discover ash raining from the sky, and a large black cloud blocking most of the sky, darkening the landscape and turning the bit of sun that peeked through, an apocalyptic-looking shade of red.

This was the result of a fire in Santa Clarita, known as the “Sand Fire” that, as of Thursday, burned through 38,000 acres of land.

The name “Sand Fire” is due to the fact that it is burning in the area’s Sand Canyon. Santa Monica Fire Department (SMFD) answered a request from the Los Angeles County Fire Department for immediate aid to assist with the battle against the inferno. The fire began Friday, July 19, after a day of extremely warm temperatures.

Santa Monica Firefighters responded with a team comprised of firefighters from Santa Monica, as well as Beverly Hills and Culver City, according to SMFD.

While the firefighters were off battling the blaze through the weekend, Santa Monica residents saw the ash raining from the sky as an inconvenience at worst, opting to stay indoors and wash their ash-covered cars after the cloud cleared by that evening. However, the real sufferers were the wildlife of the Santa Monica Bay as ash rained down upon them.

Local environmental organization Heal the Bay reacted to the incident, stating that the ash will have an effect on the waters of the bay, which has already made their “Beach Bummer” list two years in a row,

“With such a vast amount of ash, particulate matter, and other organic contaminants entering the atmosphere, it’s unavoidable that a large quantity of those materials will ultimately end up in the ocean, contributing to pH imbalances and ocean acidification,” explained Heal the Bay’s Nick Colin.

“Arguably more concerning than the fire’s effect on the ocean is its effect on nearby creeks and streams, which will bear the immediate brunt of the fire’s fury,” he said.

As the flames continue to burn through the week, being only 40 percent contained as of Thursday morning, it is possible that another smoke cloud could be headed toward Santa Monica.

Colin stated that this could cause hazy conditions, poor visibility, and reduced air quality like it did Saturday, should it make it to Santa Monica. He advises residents to use their best judgment if planning a trip to the beach – avoid overexertion, and stay indoors if you smell or see smoke. He added that it’s a good idea to rinse off with soap and water after swimming in the ocean.