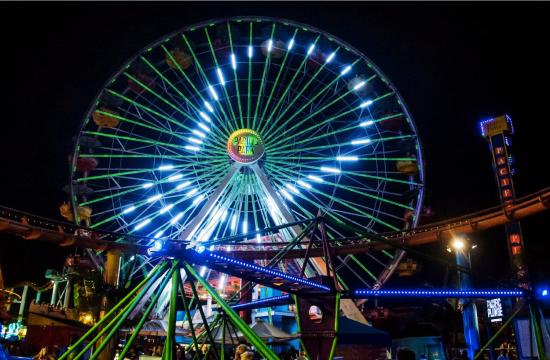 SoCal energy providers teamed up Wednesday night for the first in a series of energy conservation issues aimed at getting people outside and away from their natural gas- and electricity-fueled homes and hotel rooms.

Santa Monica Pier’s Ferris Wheel’s 174,000 energy-efficient, solar-powered, LED lights put on a stunning display Wednesday to encourage people to get outdoors and remind everyone of the importance of energy conservation, organizers explained.

The initiative is presented by The Energy Providers of Southern California – a coalition of the Greater Los Angeles region’s natural gas and electric utilities, in partnership with the California Public Utilities Commission and local city governments, and features events on select Wednesday evenings until mid-September.

“Conserve Energy SoCal was created to educate residents on ways to conserve energy and avoid energy shortages during peak times. Through this initiative, we are dedicated to working with residents to effectively cut energy consumption and conserve resources,” explained Melissa Bailey from The Energy Providers of Southern California.

“Sixty-one percent of the electricity used in California comes from power plants that run on natural gas, so it’s critically important to maintaining electric system reliability,” she added.

Throughout the summer, the campaign will utilize the Ferris Wheel at Pacific Park on the Santa Monica Pier to host a conservation-themed solar-powered light show.

As the world’s only solar-powered Ferris Wheel, the attraction hopes to serve locals and visitors alike with a fun reason to get outdoors to enjoy cool evening breezes rather than switching on lights and air conditioning inside.