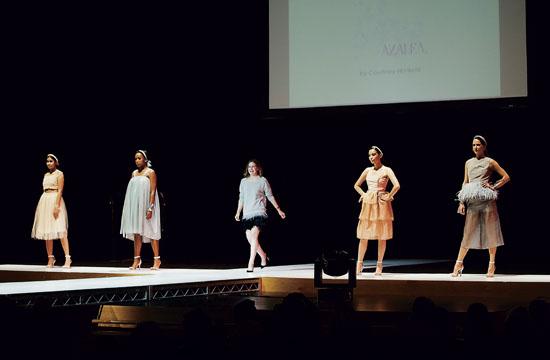 Each with a different inspiration for his or her collection, the designers created four distinct looks worn by student models on the night of the show.

In addition to the designers, a student-run production team was divided into committees in charge of coordinating the technical aspects of the show, including public relations, casting models, creating a social media presence, set design, working with student photographers and the art department, and making sure the entire night went smoothly.

The show featured a variety of fabrics, colors, and styles in general, reflecting the designers’ inspiration – many hailing from far-away places like Sweden and Japan, as well as nearby San Francisco and Los Angeles. Producer’s assistant, public relations coordinator, and SMC student Raquel Medina expressed excitement about each of the collections prior to the event.

“I’m so excited for the collections because we have such a wide range of designers, it’s not just one specific category,” Medina said. “Nothing is exactly the same, none of them are inspired by the exact same thing, none of them have the exact same colors, so it’s really beautiful to see how we are so diverse, coming from different parts of the world, and how we all come together for this event.”

The first collection shown on the runway, Love Bug, was designed by Alicia Hicks. Hicks’ goal was to bring back “simplicity, innocence, and fashion” through the looks, created especially for children.

Another collection, Nissa, combined western, classical, and Middle Eastern styles through its four individual looks. Designer, Turkia Douaodabou, said she was inspired by the gray and silver colors of the ocean before sunset.

The winning looks in the categories of creative achievement and outstanding collection were designed by Kathy Zarbakhsh. Named Katz, the collection represented a new, different style that Zarbakhsh described as “avant-garde.”

“I love fashion, so I’m going to be designing collections more and more with all kinds of crazy fabrics and crazy designs,” Zarbakhsh said. “I really love to challenge myself with things that are new and aren’t common, so I will continue doing that.”

The winning collection in the other two categories, marketability and technical achievement, was fri.elisab.sjøn, designed by Frida Sjoedin. Sjoedin took her inspiration from childhood memories of her heritage and culture as well as her experiences in Los Angeles.

Truly a collaborative event, the night came to a close with all of the designers, models, and members of the production team taking the stage to be showered in colorful balloons.