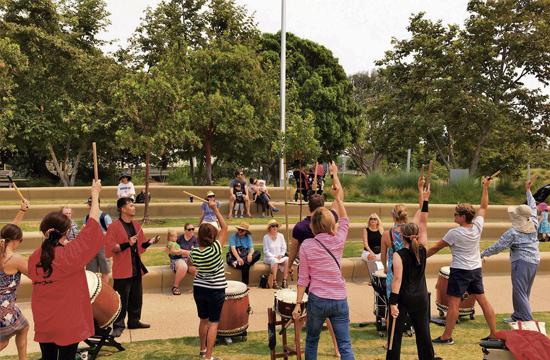 This past Saturday, the Taiko Center of Los Angeles offered a workshop to Santa Monicans and passersby as part of Tongva Park’s “Family Saturday” series of events.

Reverend Tom Kurai, who’s the director of the Taiko Center of Los Angeles and has performed and taught Taiko drumming in the U.S. for over 40 years, led the workshop. A few additional team members assisted groups of participants, which were comprised of people from elementary school age to nearing retirement age. Regardless of demographic, all participants in the rotating groups of volunteers were enthusiastically following Kurai’s drumming exercises.

Initially, Kurai instructed his makeshift class with the Japanese syllables used by traditional taiko players by leading a chant of “do-ko don” – something of a do-re-mi but for taiko drumming. However, he eventually replaced these traditional rhythmic markers with the syllables of Japanese phrases and foods, creating drumming patterns out of “konnichiwa,” the Japanese word for “hello,” and “genki desu ka, anata wa?” which translates to “I’m good, how are you?” or “muy bien, y tu?” as Kurai stated initially before jokingly proclaiming “whoops, wrong language.” His students then chanted these Japanese phrases repeatedly, hitting the drums in time with a rhythm established by Kurai and kept up by another Taiko Center volunteer brandishing a small bell.

Although the workshop was more so a fun cultural event than formal class, Kurai nonetheless made sure his students adhered to his exercises, while keeping them fun and loose. For his final group of participants, he asked for favorite Japanese foods, before turning those into rhythmic chants, before closing with a series of rapid fire ideas culminating in the declaration “I love Santa Monica.”

The Takio Center of Los Angeles was founded by Kurai in 1996, and performs regularly throughout southern California. For more information, visit taikocenter.com.