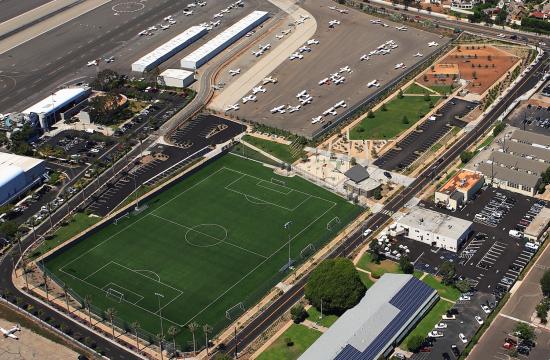 On Saturday morning, Santa Monica residents gathered at Santa Monica’s Airport Park to learn about and give feedback on the park’s future expansion and how it might affect the city.

Mark Rios, who founded his own design firm in 1985, is spearheading the project. The event began with a comprehensive presentation by Rios outlining his priorities as well as three proposed plans for what the completed park might look like. The project aims to incorporate 12 acres of non-aviation land adjacent to the existing park, practically tripling its size.

Rios’ primary goals are to showcase the airport’s history, avoid an overly-engineered design, and make sure the park feels like a single unit.

“I want this to be a cohesive 20 acre place, as opposed to a 6 acre place, an 8 acre place, and another 6 acre place,” said Rios. He plans to unite the park with a large “runway” for pedestrians that will run along the park’s entirety, and be large enough to incorporate walkers, runners and bikers.

Each of the three “schemes,” as Rios called them, was centered around adding multiple multi-purpose sports fields to the park. The primary differences between each plan were placement of roads and parking, as well as the sizes and number of fields. In each case, the majority of the park space would be allocated to an additional two or three fields.

While practically everyone gathered seemed to agree that a new park was a welcome addition to Santa Monica, attitudes were mixed as to how this space would be best used.

John Fairweather looks forward to seeing Santa Monica’s playing field issue solved with the addition of the new sports fields around which all of Rios’s plans are centered.

“Santa Monica has a terrible shortage of playing fields,” Fairweather said. “To get onto fields, it’s kind of a bidding war. It’s very difficult. By adding the fields here, we will take the pressure out of the fields all over Santa Monica.”

Lucy Tate agrees that there’s a field problem, but finds the problem to be of a different nature.

“When I hear arguments of parents saying, ‘there’s not enough of these spaces,’ it’s because they’re all booked up at certain times. If we had spaces that were available at all times, you could turn up in a park, kick a football around or have fun playing frisbee. You wouldn’t need to book it,” said Tate.

After Rios presented his plans for the larger Airport Park and fielded questions from his audience, community members could then visit tents to learn more about the proposed plans as well as speak further with members of the Rios Clementi Hale Studios design team.

Everyone in attendance was then given a “passport,” on which they could share thoughts about each design, as well as what they would like to see in the park. Though opinions were divided, residents were given the chance to voice their thoughts, and help the park project best serve the community