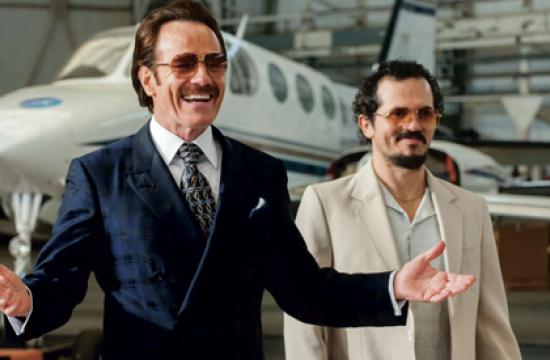 “The Infiltrator” is a fascinating true story of a U.S. customs agent named Bob Mazur, played quite well and believably by Bryan Cranston. The movie takes place in 1985 with Mazur going undercover for the government to gain the trust of drug suppliers working for the Medellín Cartel and other corrupt bankers as he poses as a money launderer. At all times, Mazur tries to be very careful, so as not to reveal his true identity. John Leguizamo also gives a good performance as Emir Abreu (Mazur’s partner), who can be reckless at times, but whose savvy street smarts prove to be helpful.

Mazur is even provided by his department with a fake fiancé named Kathy Ertz (played by Diane Kruger). She is also a federal agent, getting the opportunity to experience her first undercover mission.

Well into the movie, Mazur meets Roberto Alcaino, high up in the drug trade business, played very suavely by Benjamin Bratt. Alcaino is married with a daughter and Mazur is trying to use him to get to Pablo Escobar, who is at the top of the Medellín Cartel. Alcaino and his wife take a real liking to Mazur and Kathy and the feeling is mutual. The Alcaino’s invite the two agents into their home for dinner and Mrs. Alcaino even gives Kathy some very expensive jewelry. Trust and loyalty are important attributes to Roberto, but little does he know that Mazur and Kathy are taking advantage of he and his wife. At the same time, late in the movie when the Alcaino’s show up to an event, Mazur truly regrets that they are present, even being in the position that he is in, as he actually cares about the couple.

I found the scenes with Olympia Dukakis playing Cranston’s aunt Vicky to be extraneous. Cranston seemed too old to have two elementary school aged children. Also, it seemed too over-the-top when Cranston’s character smashes a waiter’s face into a cake because the waiter brought a cake saying “Happy Anniversary.” (Cranston was out to dinner with his wife when he spotted one of the drug-level associates that he had befriended and invited him to sit down with he and his wife. He accused the waiter of getting the order wrong saying it should have said “Happy Birthday” for his wife.)
This well-made film skillfully shows the intricacies of working undercover to obtain information. It requires that the viewer pay close attention as the narrative does not spell things out and is in the end a satisfying experience.