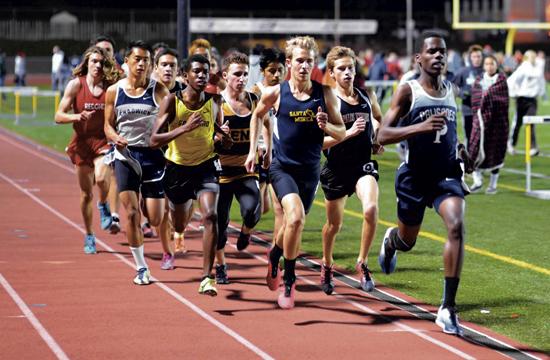 Since its founding in summer of 2012, former Samohi cross-country, track captain, and three-event track record holder Justin Sardo’s Santa Monica Speed Academy has flourished as the area’s first ever youth running club. Formerly known as the Santa Monica Youth Running Club, the Speed Academy targets middle schoolers who are interested in running but lack sufficient opportunities and settings to try the sport before competing at a high school level.

According to Sardo, track and cross-country are the only two sports lacking programs for this age group.

Sardo said that he discovered his passion for running during his sophomore year of high school after playing tennis for eight years, and hopes to give middle schoolers the opportunity to explore their athletic options rather than simply joining other sports that aren’t the right fit for them. He also hopes to broaden the athletes’ horizons and portray running as beneficial and enjoyable rather than as a punishment.

“Running just pays off for whatever you’re doing, whatever sport it is,” Sardo told The Mirror. “If you’re not playing a sport, just being a healthy individual and knowing that you can go out and run five miles…is really empowering.”

With these goals in mind, Sardo created the running club the summer before his junior year of high school. Their practices entail hour-and-a-half sessions on Mondays, Wednesdays, and Fridays each summer. The group meets at the corner of Ocean Avenue and Montana Avenue in Santa Monica to go on runs, stretch, do drills, and work on strength training, while learning about proper form and technique from the coaches. The runners are then able to showcase their newly-honed skills at local races to practice in a more competitive setting.

Sardo said one of his main focuses is to help these youths become more comfortable with running so they are better prepared in the future when high school cross-country and track seasons roll around.

“I think that there’s only so much that we can do at the high school level and we have to start earlier,” he said. “Everything’s linked and we’re trying to create success for high school and middle school.”

Although the club has remained a small venture so far, Santa Monica High School head track and cross-country coach Tania Fischer described the program as increasing slightly each year it progresses. She also said that she notices the slight advantage that Sardo’s running club gives incoming freshmen she coaches at Samohi, and appreciates the increased experience and familiarity these students have with the sport.

“I’m not saying it was huge, but it definitely made a big difference and they were more confident,” Fischer said. “They knew what to do and it just made their training easier.”

Sardo currently attends college out-of-state, but both he and Fischer hope to extend the reach of his running program beyond summer sessions.

“I thought, well that was a success with just a small little group, how great would it be if we could really get it off the ground and have it be an organization where more kids could join?” Fischer said.

In collaboration with Sardo, Fischer and Samohi’s distance coach Harley Richards will launch an after-school, twice-a-week youth track program this fall to offer middle schoolers increased exposure to running throughout the school year. Richards will also be assisting Sardo in the summer sessions.

“Our first goal is just to get enough kids interested,” Fischer said. “We’re trying to gear it towards kids that are interested in track and want to learn more about it, maybe beginners.”

Fischer expressed a positive outlook on the club’s future progressions and its benefits for youth runners as they transition into high school.

The Santa Monica Speed Academy’s first summer practice is July 11, and anyone interested can contact Sardo at justinsardo@gmail.com for more information.