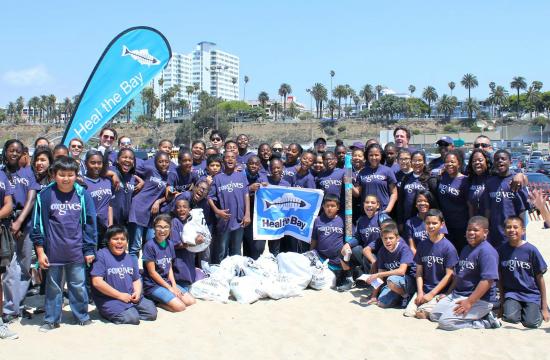 Popular recreation spots along the Los Angeles River suffer from very poor water quality, according to a technical report issued today by the environmental group Heal the Bay.

Building on Heal the Bay’s work as a watchdog for public health at local beaches and freshwater swimming holes in the Santa Monica Mountains, the organization began monitoring popular, previously unmonitored freshwater recreational areas along the L.A. River last year.

Heal the Bay staff scientists collected and tested water samples weekly for fecal indicator bacteria at three sites within two recreation zones in the Sepulveda Basin and Elysian Valley areas of the river over a three-month period in summer 2015.

While anglers and swimmers have historically used the L.A. River at their own risk, these specific zones have recently seen an increase in use by kayakers. By legally accessing the L.A. River, kayakers mark another symbol of the river’s revitalization. Unfortunately, increased recreational use poses potential health risks, according to the report.

Bacteria levels varied among the sites, but overall were quite high. For example, samples for Enterococcus exceeded federal standards 100% of the time at two sites in Elysian Valley (Rattlesnake Park and Steelhead Park) and 50% of the time in Sepulveda Basin. The Rattlesnake Park site also suffered from a 67% exceedance rate for E. coli.

These exceedances indicate risk for ear infections, respiratory illnesses and gastrointestinal illnesses for people who come in contact with the water.

Much of the water that flows in the L.A. River is highly treated and sanitized wastewater from the City of L.A.’s Tillman Reclamation Plant in Van Nuys, nearly 16 million gallons a day. Tillman’s discharge is not considered a source of bacterial pollution, and without its flow there would likely be no kayaking of the Los Angeles River. Although the recreation zones were previously unassessed, monitoring in other stretches of the L.A. River show high bacteria counts, which led to the L.A. River’s designation by the state as a bacteria-impaired waterbody.

By law, cities along the river and entities who discharge into it are required to enact pollution-reducing measures to comply with the federal Clean Water Act. The final deadlines for these regulations are a ways off, with interim and final goals set for 2030 and 2037 respectively. However, cities have worked together to develop an Enhanced Watershed Management Plan to address these issues with shorter-term milestones along the way.

In the report, Heal the Bay staff scientists laud recent efforts to revitalize the L.A. River and to open up public access to recreational zones. However, water quality improvements are needed to expand these opportunities andprotectpublic health.

“Heal the Bay is thrilled about the energy and excitement around restoring the river, but it’s critical that water quality improvements don’t get left out of the conversation,” says Dr. Katherine Pease, Heal the Bay’s Watershed Scientist.

The federal Army Corps of Engineers has an approved $1.3-billion plan to revitalize an 11-mile stretch of the river, focusing on habitat and recreational improvement. Heal the Bay strongly urges that the rehabilitation work incorporate specific and measurable measures to enhance water quality.

The full report has a detailed list of recommendations for increasing beneficial uses while protecting public health. Among them:

·  Swimming: While many families recreate in the water, particularly on hot days, adults and children should avoid swimming in the L.A. River, particularly submersing their heads under water. We envision a swimmable L.A. River one day but current water quality is not yet at a healthful level. If there is any water contact, rinse off with soap and water afterward.

·  Kayaking and Angling: People should limit water contact, especially avoiding hand-to-face watercontact.Usersshouldnotenterthewaterwithanopenwound,ifimmunocompromised, or after a rainfall. If there is water contact, rinse off with soap and water afterward.

·  Public notification: Groups promoting recreation in the L.A. River should provide water quality information and best practices to participants, using consistent, accurate and prominent information on all outreach materials, and in multiple languages, consistent with the demographics of visitors.

·  Increased monitoring: Responsible municipalities should institute, at a minimum, weekly water quality testing for fecal indicator bacteria in the recreation zones during the open season (Memorial Day to October 1), and at other known swimming spots along the Los Angeles River.

“The public has a right to know about water quality conditions in the L.A. River so that they can make informed decisions on how to minimize their risk of getting sick,” says Dr. Rita Kampalath, Science and Policy Director for Heal the Bay. “We look forward to working with the City and recreation outfitters to improve outreach and monitoring measures along the river.”

At the region-wide level, Heal the Bay continues to advocate for funding for comprehensive water-quality improvement projects like increased stormwater capture and wastewater recycling. These measures would reduce polluted flow into our recreation zones while increasing local water supplies in a time of drought.

About Heal the Bay and the L.A. River

Heal the Bay has been monitoring water quality in streams and rivers since 1998 through our Stream Team program. In 2014 we initiated a pilot study to monitor human use and water quality at freshwater swimming spots in the Santa Monica Mountains, focusing on bacterial pollution and public health implications.

We are currently in our third summer of monitoring water quality in those swimming locations. GivenHeal the Bay’s 25-year history of informing and educating beachgoers about beach water quality through our Beach Report Card, assessing the water quality of the Los Angeles River recreation zones was a natural next step.

Heal the Bay has a long history of work on the Los Angeles River; we have advocated for improved habitat, water quality, and recreation by weighing in on numerous policies and permits concerning the Los Angeles River such as TMDLs, the Recreational Use Reassessment (RECUR) study, permits for dredging and clearing vegetation, and other regulatory actions.