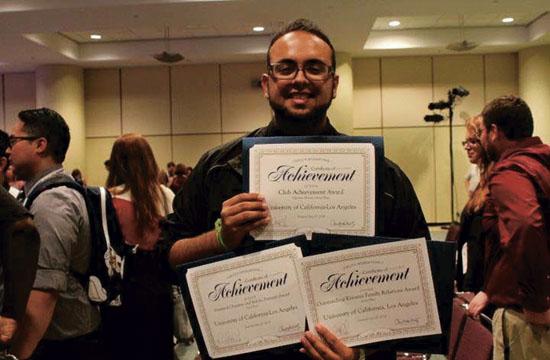 At the convention, the UCLA chapter was awarded 2nd place in Club Achievement in the Platinum Division (chapters with more than 86 members). This award recognizes chapters who have excelled in all aspects of club operation. UCLA has placed first or second in this top category for the past nine consecutive years.

UCLA members frequently volunteered at homeless shelters, beach clean-ups, meal services, and more, including a monthly cook night at Alexandria House, a transitional residence for single women and women with children. The club also funded and took two busloads of students from Johnnie Cochran Middle School on a field trip to the California Science Center.

“I think it’s hard for the general public to grasp just how impressive the UCLA CKI chapter is,” said Rich Thigpen, UCLA CKI Faculty Advisor. “These are college students – most with no previous managerial experience – who manage a $50,000 annual budget, conduct weekly board and committee meetings, hold quarterly overnight retreats, and plan multiple service projects and fundraisers every week. They’re not just remarkable in the world of Kiwanis, they are a source of inspiration for other young people and especially older adults like me.”

In total, UCLA CKI raised nearly $21,000 during the past year for different charities through events such as bacon-wrapped hot dog sales, TV tapings and emoji pillow sales. The club was among the top teams for last year’s Dance Marathon at UCLA, with members raising more than $13,600 for the Elizabeth Glaser Pediatric AIDS Foundation.

In addition to the club-level awards, UCLA member Josef Madrigal was recognized as a Distinguished Lieutenant Governor, having overseen six CKI chapters in the greater Los Angeles area. He is currently serving as the 2016-17 chair of the California-Nevada-Hawaii district Kiwanis Family and Foundation Committee.

“It is truly an honor to have received these awards this past weekend,” said Lisa Chong, 2015-2016 UCLA CKI President. “These awards would not have been possible without the dedication and support of our selfless members who have organized innovative projects and events, are involved in committees, and have created tight-knit families and bonds. I want each member of UCLA Circle K to be proud of their individual contributions in building our club to what it is today and to let these awards serve as an inspiration to reach even greater heights in the future.”

With 228 members, UCLA has one of the largest CKI chapters in the world. For more information go to: uclacki.org.