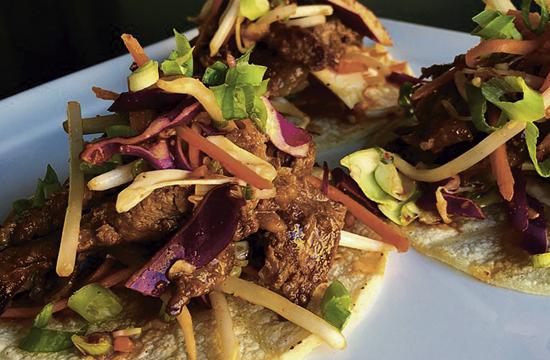 Keeping a restaurant is hard in a city like Los Angeles, where businesses close as often as they open. In a restaurant like Brü Haus, a gastropub located on Wilshire Boulevard and Granville Avenue just west of the 405, however, there’s no wonder in why they’ve managed to stay open for so long.

Brü Haus opened May 7, 2011, and started as a bar that specialized in German, Belgian, and American craft beer. With a full liquor license and beer imported directly from Germany and Belgium, manager and principal Wen Yeh then sought ways to expand, “There is only so much a bar can do,” Yeh said. “A bar is a bar wherever you go. But you can’t rely on that alone, you have to expand.” And indeed they did.

After taking on head chef Jina Lee, the establishment started attracting not only a thriving base of tourists and foodies, but also regulars. Brü Haus has a healthy stream of locals stream in on a frequent basis, of which I may become after the experience I had there.

Upon entering the restaurant, the ceiling stretches up seemingly to the heavens, with skylights illuminating the room, and presumably a beautiful view of the sky at nighttime (I went around lunch.)

Classic rock plays on the speakers, but not too loudly. Tapestries of various beer companies hang along one wall. The bar is directly to your left, with a very friendly bartender and all the liquor bottles visible to the eye along the shelves. Rather than having to look intently at a menu, the entire selection is right there. There is still a menu to look at, but I like when bars have the liquor visible, as it gives the restaurant on the whole a feeling of transparency.

The food is typical of a gastropub, with lots of meat and cheese. However, I was pleasantly surprised at the spin that Chef Lee put on some of the dishes, such as cauliflower tempura, which was light and utterly delicious. The shrimp mac and cheese and pulled pork sandwich were perfectly seasoned and cooked, along with a side of sweet potato tater tots (swater tots I guess you could call them?) with their own dipping sauces of sriracha aioli and garlic aioli mixing altogether in a symphony of sweet, salty, and spicy. Never before have I wished I had two stomachs so I could try more dishes.

The menu is split into two parts: the “ever-since” menu and the seasonal menu. Chef Lee changes out the seasonal menu two to three times a year. She explained her reasoning for having a split menu, “There are some items I like to experiment with, and other items that our regulars demand we keep on threat of boycott.”

Lastly, there was the beer: Brü Haus’ claim to fame. Importing beers such as Schönramer, Schwendl, and Reutberg directly from Germany, the beer is definitely an experience. There is a vast difference between Schönramer brewed in America under the name versus Schönramer brewed in Germany itself. Combined with the pulled pork sandwich, I was never so happy to be bursting at the seams.

Overall, if you’re a professional looking for a gastropub experience that won’t leave a dent in your wallet, I highly recommend Brü Haus. Prices hang in the mid to high teens, and the happy hour ranges from 4 p.m. – 8 p.m. on weekdays, featuring beers ranging from $3 – $9, and appetizers that are all under $10.