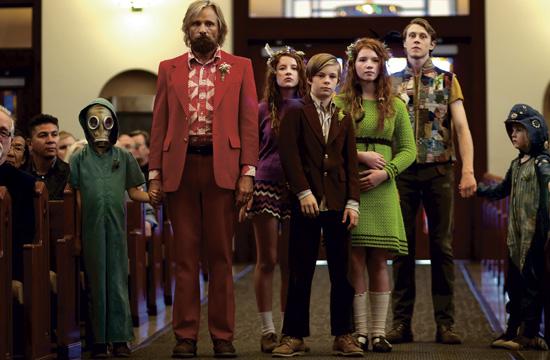 “Captain Fantastic,” is not a superhero movie, it’s a film populated with intellectual characters and a plot that takes unexpected turns. It’s an entertaining mix of tenderness, sadness, and comedy that will leave the viewer questioning how we raise our kids in this society. “Captain Fantastic” stars Viggo Mortensen as Ben, a hippie and rebel raising and home-schooling his six kids off-the-grid in the Pacific Northwest. Ben stresses rigorous fitness and intelligent thought from his children. They even celebrate Noam Chomsky Day, paying tribute to the famous linguist. The way the kids are brought up is unconventional to say the least.

The plot kicks in when the seven of them go on a road trip to attend a memorial for the mom of the kids. The eccentricity of the bunch is contrasted with the outside world. A humorous scene occurs when Ben and his children stop at a roadside diner and he takes one look at the unhealthy menu of burgers and milkshakes and says we’re not eating here.

What I liked is the film raises thought-provoking issues of child-rearing, capitalism, and independence. With Ben and his kids staying at his sister in-law’s place, Ben answers everyone’s questions as bluntly and honestly as possible, avoiding any tact, and even tries to offer his kids wine, to the shock of the host family. He tries to show off how smart his kids are by first asking his sister in-law’s kids (who look to be young teens) what the Bill of Rights is. When their answers do not seem to satisfy him, he brings in his eight-year-old, who is able to discuss the Bill of Rights with ease and depth, emphasizing the point that he has been teaching them far more than what they would be learning in school.

Ben gets his children (and the viewer) to question capitalism, using Noam Chomsky to support his ideals. As they are driving past a mall, he points out the crowd of people rushing to buy more stuff as an example of what is wrong with capitalism.

Regarding independence, Ben believes replica rolex and tells the sister-in-law’s family that his kids having grown up the way that they have, are much more prepared for the world than typical children are. They are more educated and will be better suited to fend for themselves once they are adults.

Mortensen’s performance and casting as Ben is excellent, as he truly becomes that character. His kids in the movie are also quite good, all getting their moment to shine. I particularly liked the scenes in which the eldest boy talks with a female he meets at a trailer park and they go off on their own and begin conversing. His awkwardness in which he shows interest in her and tries to win her over is both endearing and a result of having lived in such isolation with his family.

When early in the movie Ben is taking all six of his kids rock-climbing, I felt his parenting choices were going too far, as he was clearly (as the scene showed), putting his kids in danger in order to teach them survival skills. The scene where Ben and the children make their presence known at the mom’s memorial service I found to be too over-the-top and crass. When Ben, who is supposedly a very intelligent man, instructs his kids to shoplift, I thought the film crossed the line. Also, late in the movie I thought what Ben and the kids did with his late wife (the whole process) was quite tasteless. The actress playing the mother of Mortensen’s wife, Ann Dowd, looked (age wise) like she could be his wife.

While not exactly a mainstream movie, this is a film with quirky touches that is worth taking a chance on. It celebrates ideas and intelligent thought throughout.