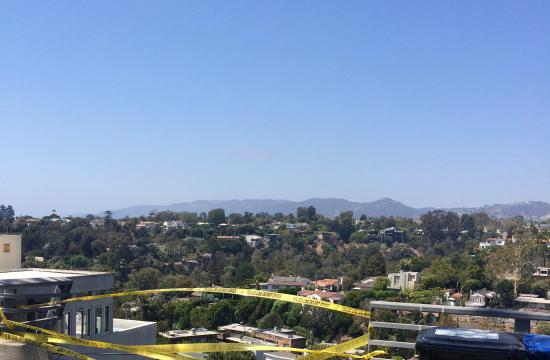 A speeding BMW was seen flying off the cliff on 4th Street and Adelaide Saturday evening, with witnesses recalling that the event was like something out of the movies.

"My understanding is that car was being pursued north on 4th Street by SMPD," resident Phil Brock told The Mirror.

Witnesses say that the car sped up to over 90 mph and flew over the side of the cliff, clipped a weathervane on the house below, missed all other trees and landed at the corner of Ocean Way and Channel Road, according to Brock.

The Mirror is waiting for confirmation of the incident from SMPD.

Witnesses say that the car involved was a BMW 328i with a single female occupant in her 30s.

The car reportedly smashed through the cement wall at 4th and Adelaide, proceeds to clear all buildings and trees and lands in the middle of the street (Ocean) on its trunk.

The car bounces, does a few flips in the air, and lands on its 3 remaining tires.

Airbags are deployed and the driver was unconscious with strong smell of wine. The driver was transported in ambulance with only minor lacerations to face.

Damage to fence caused by the tire that came off eventually impacted a Jeep vehicle parked on the street.

There was minor damage to home in the path of the car caused by cement debris from the wall…this was evident on the cement stairs as well. The car also appeared to have clipped the weathervane from the top of the home.

Witnesses say that they saw and heard a wave of debris flow across the street just prior the car crashing to the ground.